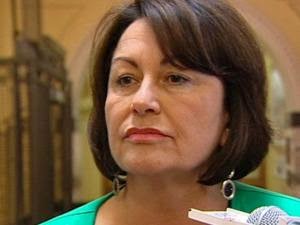 A repost from Local Bodies about Hekia Parata attempting to sneak some fake ‘consultation’ on the changes to the way that schools are run. bsprout is both a teacher and list candidate for the Greens.

Classroom teachers, the New Zealand Educational Institute, the New Zealand Principal’s Federation and education academics have all strongly rejected the Government’s proposed $359 million Investment into Education Success (IES). All believe that this substantial amount of money will not produce the results that the Education Minister claims and would be better spent elsewhere.

At a recent meeting of primary classroom teachers in Invercargill, one teacher was particularly upset. She had shifted to New Zealand to escape the failing English schooling system only to find the same changes are about to be implemented here.

Respected US academic David Berliner happened to be in New Zealand when the Prime Minister first announced the new spending and he strongly rejected the claim that teachers make the biggest difference to child achievement. He claimed that the socio-economic background of the child has the largest influence on education outcomes (according to all research) and he accused our Prime Minister of lying for stating otherwise.

Prof Martin Thrupp has made a number of useful points in a recent article on the IES. He voices concern at the lack of media engagement with these major changes to school management and questions the evidence for them. Few New Zealand academics have been consulted despite the fact we are internationally regarded for our education research and any changes should be based on our own contexts. Prof Thrupp is concerned that the government is using a management centered approach to lifting children’s achievement rather than a child centered one and we are losing the professional culture that made our education system so successful in the past.

NZEI has listed a number of alternatives where the funding would be better used. Rather than removing successful principals and teachers from their schools and classrooms for several days a week NZEI suggests the funding would provide better outcomes if we:

One would think that primary principals would welcome the opportunity to earn $50,000 more on top of their current salary as one of the new ‘Executive’ Principals, and yet they have solidly rejected the concept. They cannot see how they could do the job of leading their own school well if they are removed from it for several days a week.
Education Minister Hekia Parata has been less than convincing when attempting to justify a corporate styled model of education management. Although she continuously talks about the importance of collaboration in the sector, her understanding of what that would mean is quite different from the profession’s view. She talks about data and achievement outcomes and doesn’t refer once to the real needs of struggling children. It is also interesting that she claims to be working positively with NZEI and the NZPF and yet neither has supported the outcomes.
Parata claimed that they had been working on the changes for a year, but the profession only became aware of them when they were announced in January and any consultation has only occurred over the past few months. In reality the IES has been presented as a fait accompli and full consultation and discussion with the wider profession has been deliberately limited by the tight time frame. National Standards were implemented without a trial and without the support of the profession and after five years they are still problematic, these new comprehensive changes are being introduced in the same flawed way.
The Green Party has taken a different and cheaper route to lifting the achievement of struggling children. Over 80% of our children are actually doing well in the current system and far more could be achieved if we addressed the real barriers to learning for our most disadvantaged children; ill health, poor housing and struggling families. Health and welfare hubs are already working well in some schools and, as a proven model, it makes sense to establish them in all low decile schools. The Green Party believe in targeting funding and support rather than inflicting the entire system with a corporate model that has failed elsewhere.