The latest load of bill-paying work has finished (and the site is paid up until June). I’m at a relatively loose end for a few weeks. There are a number of postponed tasks that I’ll catch up on, but there should be a lot of time for the site.

Tonight there will be some work to bring the site back up to scratch with plugins. There will be a number of changes to the site over the next week for such things as advertising and whatever mod’s I find interesting. Put in your wish-list here. If you see something wrong, then comment in this post. 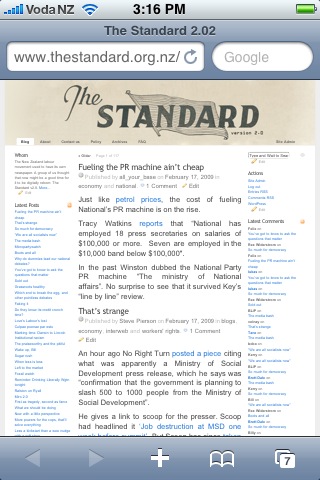 Because of the type of work I’ve been doing, I haven’t been as pervasive on the site as usual. I can feel my moderating and banning skills slipping away through lack of use.

However that could all change as I get more mobile. Lyn brought an iPhone. And I was so impressed by the net access that I brought one as well to replace the Nokia with missing button (very few buttons on a iPhone). It is done to further my PDA skills (IRD – please note), to moderate the trolls more easily, and because the damn thing is so much fun.

So today as part of the unwind of the brain, I’ve been playing around with a iPhone CSS version of The Standard’s admin pages to allow me to operate the site more effectively on a smaller screen. If anyone else uses these types of wee browsers, then give me a yell.

25 comments on “Maintenance and upgrades ”