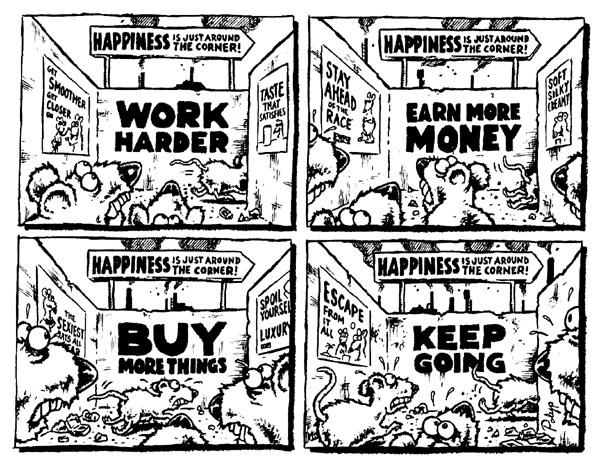 Remember the War on Drugs?

Turns out the solution may well lie neither with legalisation nor in underpinning prohibition with gruntier laws and more police powers.  Those solutions are based on the assumption that drugs are the problem and that addiction is a disease the individual catches by ingesting drugs.

But if that is true, then what about shopaholics or the people suffering from any number of other addictions? Do shops or shelves of goods create a disease in the shopaholic? It doesn’t make sense, does it? It would seem more sensible to suggest an underlying cause responsible for the addiction to shopping or hand washing or drugs.

Rat Park was an experiment conducted in the late 70’s on drug addiction that concluded that addiction was a situation, not a disease. (The link leads to other relevant materials.)

In other words, what the experimenters concluded was that stressed environments promoted addiction. That’s a no-brainer, right? If you live in an unrewarding or/and stressful environment you will seek relief and some of those relief’s will be, or will become addictive. But take away the stressful environment and the urge or need to seek relief from the situation diminishes.Funny that the funding for further study was pulled.  Here’s a link to a pdf  on the experiment and it’s results entitled Effect of Early and Later Colony Housing on Oral Ingestion of Morphine on Rats .

Meanwhile, we have had 30 odd years of  neo-liberal economic policies making life tougher for the majority of us. That’s a large part of the actual problem. And anecdotal evidence suggests ever higher numbers of people on drugs. But that’s not a problem. Not really. And neither is the crime rate. Nor is any increase in mental illness across the population.

We’re in a crap situation that the neo-liberal economic prescriptions of the past decades have contributed to.  More people are poorer now than was once the case. And the poorer we are the more likely our situation is to be more crap than the next person’s. ..less rewarding work environments plus less desirable neighbourhoods plus less decent services or access to them and so on,  all add up to more in the way of a desire to escape; more addiction.

The cynic in me might argue that if the powers that be were honest about it, they would admit that addiction is seen as a problem only insofar as addictive impulses cannot be controlled, managed and directed to the degree they once were. After WW2 it was possible to channel addictive impulses to achieving the ‘post war dream’. ‘Everyone’ was included in society’s drive to achieve a broad shared vision. That’s not the case any more, with more and more people being deliberately excluded from a disintegrating society that touts consumerism, predicated on a tawdry concept of individualism, as the only means to achieve happiness or fulfilment.