Sqn Ldr Dick 'Limpy' Worth: his jolly spiffing Blenheim is about to go MIA

Richard Worth, OBE, is now in very serious trouble having been snared in what looks like untruths about using his Ministerial portfolio to further the interests of a company he had a private commercial interest in. It’s pretty blatant and really Key won’t be able to get away with keeping him on for much longer.

The death knell was when a very nervous Minister made a Freudian slip in the House saying that he “had no erection” while trying to stammer the lame excuse that he “had no recollection”. With that one slip you could almost see the falling guillotine reflected in Key’s eyes as he smiled at Worth’s anguish. I felt sorry for Worth, watching the man implode as he realized the enormity of his slight but catastrophic slip. He did well to hold back the tears, so apparent was it that at that very moment a quite long and harmless, if not very illustrious, career had just ended. And still the troubles for Worth seem far from over as Eddie suggests. 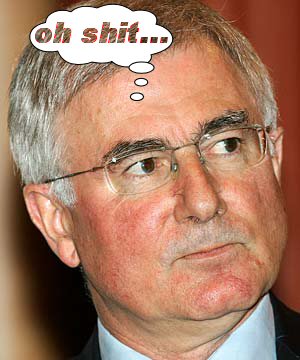 Yes you should look worried mate

Now Tim Groser, National’s Minister of Trade, has taken a serious hit. Groser was also a director of the Aviation training company that Worth’s involved with, but Groser at least resigned in January. Why he took so long to realize he was ethically bound to resign when elected in November is a bit of a mystery but fair enough, we’ll give him the benefit of the doubt on that one.

What’s now been revealed is that Groser “just remembered” last night he still has 2000 shares in Indian Overseas Group Ltd, a lobby group for Indo-New Zealand trade. I wish I had enough money where I could forget about 2000 shares of anything, but more importantly I wonder what other pesky details concerning obeying basic rules have he and his fellow ministers “forgetten”?

This kind of rubbish amateurism has the potential to tarnish New Zealand’s well deserved and invaluable  international reputation as a corruption free, largely ethical and responsible trading partner. A Minister that’s so lax with his personal finances that he can’t remember a few thousand shares here or there is simply not good enough. Particularly when he’s legally obliged to make sure he doesn’t have conflicts of interest like this.

Perhaps we need an audit of all ministers to make sure nobody else has “forgotten” anything? Surely our gallant, albeit tired, PM is all for Government transparency and accountability of the highest standards?

So far Key has done nothing but issue a reprimand as limp as Worth’s attempted defence. If he’s to avoid being labeled a two-faced hypocrite Key has to hold his ministers to the same standards he expected of Labour while it was in Government. The records are littered with Key calling for Labour ministers to be fired for far lesser offences. Reprimands in private are not enough to cleanse this, it’ll keep festering and eroding National’s already wobbly reputation on basic competence and trustworthiness.

Yet another ineffectual limp backwards for National.

36 comments on “Mayday Mayday, Worth’s bought it and I’m losing altitude – Groser out ”