“Confusing and might be taken the wrong way by some”

Duncan Garner had to do a balance piece against David Shearer because he has been at the forefront of covering the implosion of Melissa Lee’s campaign. Garner says someone “deep within” Lee’s campaign pointed him to an interview where Shearer says keeping employment high, particularly among migrant communities is important because when people don’t have work it is more likely some will turn to crime. Except he didn’t put it that clearly.

Actually, he was very inarticulate, which is a strange trait for a man with his background to have.

As gotcha politics though, this fell pretty flat. Garner called it an attempt at “payback for Lee’s awful performance so far” (payback? they’ve got no-one to blame but Lee). Garner acknowledged what Shearer was trying to say is true, unemployment does lead to crime, but his “comments are confusing and might be taken the wrong way by some”.

The important thing is that Shearer, unlike Melissa ‘crims from South Auckland can’t use off-ramps’ Lee, is actually right. Crime is a symptom of poverty. Unemployment is a prime cause of poverty. Check out the numbers from StatsNZ. 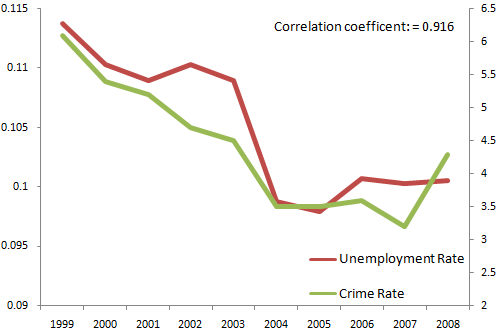 0.92 correlation. I’m actually amazed it’s that high. (It also has some pretty worrying implications for crime if unemployment reaches 8%  during this recession).

Incidentally, I wanted to do a graph to test  Lee’s motorways stop crime claim but I couldn’t even think of a remotely sensible way to that.
–Marty G