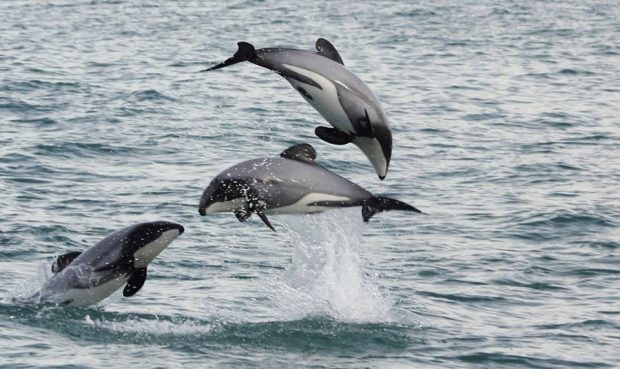 Maui and Hector’s dolphins, found only here in New Zealand, have the dubious status of being among the world’s rarest. They’re the symbol of all the bad we’re doing to the oceans. But worst of all known threats to these tiny dolphins are fishing related impacts, when they get caught and drown.

The Department of Conservation has a long list of incidents with Maui and Hector’s dolphins killed in nets, right up to the present day. Historically both recreational and commercial nets did the damage, but these days it’s mostly trawling that’s killing the dolphins. Probably only a few of the actual dead dolphins are reported, but some have washed up, eviscerated, partially weighted, in failed illicit disposal attempts. Others would never be found.

Research from the University of Auckland Business School shows that at least 2.7 times more fish was caught in the New Zealand fishery from 1950-2010, than reported. News last week focussed on penguin populations off Southland being destroyed by trawling. New Zealand Sea Lions are hanging on for dear life because of entrapment in squid nets. Seabird by-catch is untold.

Under pressure from these sorts of facts the government has planned to implement electronic video monitoring systems on the NZ fishing fleet. The National Government also promised an increase in fisheries observer coverage up to 100% in ‘core’ Maui dolphin habitat by 2017. So far, to protect these critically endangered dolphins, observer coverage is at about 18%, at the cost of reduced observer coverage elsewhere.

Electronic monitoring has been supported to achieve ‘’100%” observer coverage. This has been defended by even National Party Ministers and MPs, who have seen it would ‘rebuild trust and confidence’ in the fishing industry, and have a deterrent effect on illegal practices. On the other hand, Glen Simmons from the University of Auckland said that if the true cost of overfishing and by-catch was considered, many in the fishing fleet would be out of business, so widespread are transgressions. The fishing industry itself hasn’t been so keen on full transparency, with fishing interests calling for a ‘pause’ on the camera implementation.

A 2009 trial of video surveillance on six boats out of Timaru, was intended to monitor Hector’s dolphin protection. The cameras identified significant discards of non-target and undersized fish, and the capture of two Hector’s dolphins. Both were released from the net, one dead, the other’s fate unknown. Neither were reported as required by law.

The subsequent Heron Inquiry found the failure to prosecute for either the fish dumping or the killing of threatened dolphins, exposed regulatory and enforcement weaknesses within Ministry of Primary Industries’ ranks and its wider culture. The video evidence showed the cameras worked, even if the Hector’s dolphin protection and MPI enforcement didn’t.

In anticipation of the roll out of electronic video surveillance, this year MPI halved observer coverage in the East Coast Snapper fishery area. The electronic monitoring isn’t perfect. It can be turned off, obstructed or obscured. The recorded information is to be analysed by a consortium of fishing interests. There are fears that video evidence might not always be admissible in court. Refinements are needed to improve reliability, security and transparency. But it’s better than the alternative, mostly nothing. Either way, more observer coverage is essential for sustainability of fish stocks and associated ecosystems, not less.

The new Labour-led Government’s plans to dismantle the Ministry for Primary Industries and create a separate Fisheries Ministry, showed hope for improvement. Last year, before he assumed his new position as Minister of Fisheries, Napier MP Stuart Nash was encouraging National Party TukiTuki representative Craig Foss to do more to manage fish stocks, monitoring and compliance. He said electronic monitoring was a good step, which he hoped would deliver greater transparency about what was being caught.

Last week however, new Minister Nash announced a delay to the roll out of electronic monitoring, citing concerns with privacy and cost. He said he’d had discussions with stakeholders and that “this is an important initiative to get right”, and this government would not be following the ‘hasty timetable’ set by the previous Government.

In the absence of a comprehensive observer coverage programme; but in light of unsustainable dumping and by-catch of non-target species including endangered dolphins, sea lions, and seabirds; a culture of obfuscation in MPI; and self-regulation and capture by the fishing industry, a resolute approach from the Minister is required.

In citing fishing sector privacy and cost concerns rather than addressing the issues that would make the video monitoring more robust, Minister Nash appears to have been quickly won over by vested interests in the fishing industry. His decision to ‘pause’ the programme, echoing the words of fishing representatives, puts the industry, the enforcement regime, the dolphins, and the Government’s reputation, at risk.

33 comments on “Minister puts sustainability, and government’s reputation at risk ”