Ministers in a Lab/Green govt

Paddy Gower looked fit to burst with excitement over ‘Greens and Labour fighting over Finance portfolio‘ last night. Of course, the actual quote not so exciting – just Russel Norman saying it was one portfolio that would be the subject of negotiations in the formation of a Labour/Green government. But it does raise a valid question – who would be ministers in a Labour/Green government?

OK. First off, lets assume the government MPs are 30% Green, 70% Labour – roughly in line with the current polls. Next, we’ll have to assume that the current portfolios hold – ie Shearer is leader, Cunliffe is in purgatory for the sin of not having a dirt operation on the scale of Mallard/Hipkins/Mold/Robertson, and Jones has no portfolios either. However, we will assume that King leaves for Wellington mayoralty (the housing policy will help with that – and she’ll be gone before its economics get torn apart in the full election release).

I’ve chosen what I regard as the top 20 portfolios – the ones that wouldn’t usually be held simultaneously with any of the others in the top 20 – and looked at the spokesperson from each party for each. Simply, I’ve chosen the best of the options in each portfolio – excepting that Shearer would be PM. And I’ve made a few changes where there’s someone else better than either incumbent or political necessity. 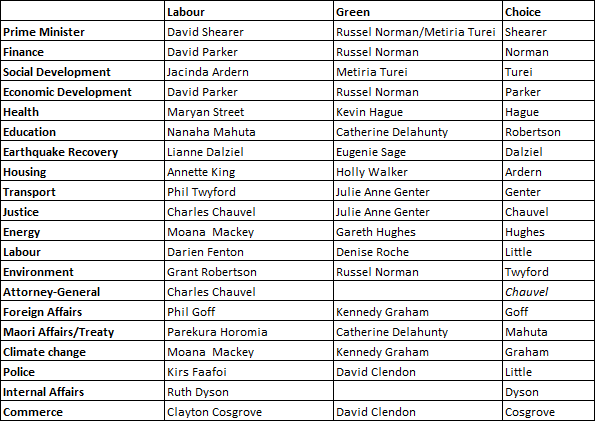 There’s 7 Greens out of 19 there, over-represented on the current polls but, in reality, Norman would probably get Economic Development and Parker Finance – the trade-off would be an extra Green Cabinet minister.

There’s a problem with Justice and Attorney-General. They shouldn’t both be Chauvel but there’s not many spare lawyers with an interest in justice in the ranks.

For the ministers outside Cabinet (Key has a record 28 ministers) I would choose Walker (would be in Cabinet except giving Turei MSD means giving Ardern Housing), Delahunty, Clark, Sio, O’Connor, Fenton, Curran, Mackey and Street.

I have to say, I like the look of that Cabinet. They would have much better policy, of course and, apart from the top name, nearly all of them would better the current minister in sheer competence.

143 comments on “Ministers in a Lab/Green govt ”