Almost missed among all the blacked out paragraphs of the Transport Briefing to the Incoming Minister are 2 interesting graphs. While not explicitly mentioning peak oil, the graph of the National Land Transport Fund shows a massive shortfall in revenue in a ‘high oil price, low growth’ scenario. The other shows how low-quality National’s highway spending is.

And the ‘low growth’ is 1% below Treasury’s long-term assumption of 2%. Again, average growth of 1% is hardly outlandish: the average in the last decade was 1.5% and in the last five years growth has averaged 0.5%.

A 100% increase in oil price and growth only cut by 1% per annum is an optimistic outlook in the peak oil future. As the world’s available supply of oil diminishes and more and more of it is tied up by domestic consumption in producer countries and local-term supply contracts to China, the price will rise much more rapidly than that – all that will constrain them is demand destruction in the form of successive recessions and anemic recoveries (we’re already in this cycle, in case you haven’t noticed).

So, this is the Ministry of Transport’s ‘weak peak oil’ projection. And look at what it does to the revenue coming into the NLTF: And this, remember, is a weak peak oil scenario.

The smart money would be in using the resources we have left to build a less oil dependent (and to an extent than means less transport dependent) economy. Unfortunately, we’re using the money to build highways to nowhere instead. Here’s another graph from the MoT BIM showing the Benefit:Cost ratios of the government’s state highway spending: 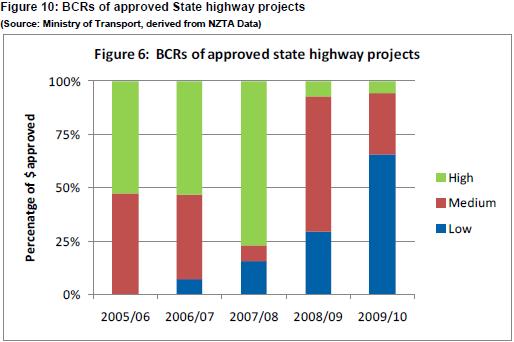