Mr Slippery at it again

An interesting interview between John Key and Wammo today.

He starts out saying Labour is spending all its time talking about Owen Glenn and Peters whereas he wants to concerntrate on what matters. Funny, because he then spends the rest of the interview turning the topic back to that issue whenever possible and the only questions he asked in Parliament today were on Peters/Glenn, and it was the only topic his MPs talked about in the General Debate.

Key then went on to make a rather surprising statement on the continuing leaks of National policy to Labour. Key still insists that some Nat accidentally left a motherlode of policy papers in a cafe that happened to get to Labour. Asked if he expected this supposed idiot/senior Nat to come forward, Key said “we’re never going to get to the bottom of it, are you telling me that six weeks (6?) before an election where you could become a Cabinet Minister you’re going to go and say ‘hey, John, I left my papers there.. it’s not a matter of trust, if you were in that position they’re never going to be able to prove it and you would be embarrassed”…. so, when it’s politically expedient Key is alright with his potential ministers keeping politically embarrassing secrets to themselves but if there’s half a way to accuse anyone from Labour of the same then it’s the end of the world. Good to know it’s all about principle with this guy. 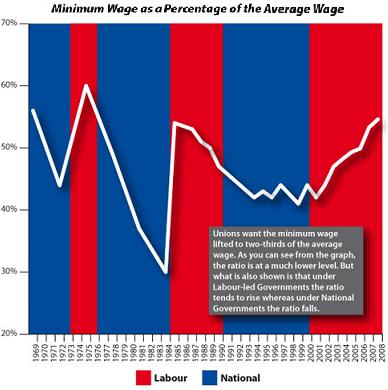 But I agree with Key. I’m bored with Peters too. I would like to hear him do what he keeps promising – explain how he will raise wages and reduce emigration. He could start by telling us if he would break a pattern of 40 years and become the first National Prime Minister to keep the minimum wage being devalued by inflation. So, John, will you tell us? Or will it be more hypocrisy over Peters/Glenn?

27 comments on “Mr Slippery at it again ”