One of the Right’s silly myths, never backed up by any facts, is that not privatising ACC leads to more injuries.

The logic (and it’s a logic only the money-obsessed could come up with) is that private workplace insurers would charge higher premiums for dangerous workplaces and lower premiums for safer workplaces – this would encourage workplaces to become safer and the injury rate would fall.

As a commentator in one of the papers (whom I can’t now find) scoffed, ‘like the thought of saving a few dollars on premiums is the reason I would be careful not to hurt myself’. On the other hand, they claim that the injury rate has risen since ACC privatisation was scuttled by Labour. 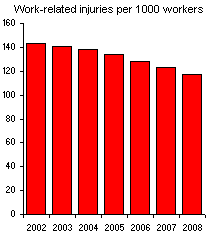 Wrong. Work-related injuries have been decreasing over the last decade – down from a high immediately after re-nationalisation of ACC of 143 claims per 1000 workers to 117 in 2008. The drop is thanks, no doubt, to ACC’s investment in injury prevention and the leadership of the unions on health and safety (it’s their members that suffer, after all).

So, another ACC myth busted. The scheme isn’t in financial trouble, claims aren’t out of control, injuries aren’t raising and won’t be brought down by privatisation. Tell me again, what are the benefits of privatisation? Oh yeah, profits – for Aussie insurers, paid for by you and me.

20 comments on “Myth-busting: ACC and injuries ”