Attacks on the “anonymity” of bloggers by some MPs and journalists, are a symptom of change that threatens to make political participation more democratic.  Until the early 20th century journalists were largely anonymous.  The rise of “name” journalism and infotainment have increased voter dis-engagement.  A critical, independent fourth estate, free from commercial and state interference, is crucial to democracy.  However, well-managed blogging (by any name) can also contribute significantly to democratic re-engagement. 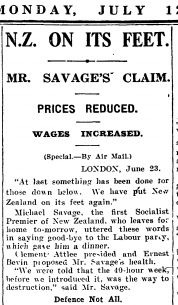 As outlined by Zvi Reich (2010), the now standard use of named author bylines, was the result of a gradual development during the 20th century.  With reference to his examination of NY Times and the UK Times, Reich shows how this was the result of a progression through 4 distinct phases:

1) anonymous journalists with an authoritative voice, aimed to stop the journalist coming between the reader and the story, by maintaining an impersonal voice (see the accompanying image of an Auckland Star article where Michael Savage talks directly to the public).

4) most authors named with personal bylines, due to journalists’ pressure for an equal share of the public acclaim. This was accelerated by the celebrity-making  influence of TV news. 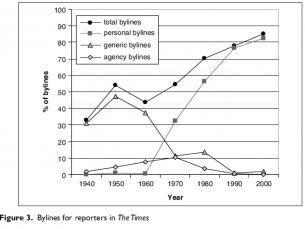 Reich’s article shows how the use of bylines developed as the result of multiple, sometimes conflicting factors, which included changes in technologies and dominant discourses. In Reich’s article the rise of stage 4 in the UK coincides with Murdoch’s rise in publishing, when unions lost their influence.  They had been resistant to what Reich refers to as “the professionalization” of journalism.  As Geoff Kemp tells it, the introduction of new technologies in UK newspaper publication led to industrial disputes, which resulted in submissive journalists and a compliant press.

Naming of authors is supposed to create transparency.  However, this conceals the co-authors as identified by Reich; such as news sources, editors, sub-editors, spokespeople, and press release writers, each having the potential to add bias.  On TV, with the on-camera reporters being most closely associated with a story, co-authors would include camera and sound operators, editors, producers, studio anchors, and more.

As I argued in an earlier post, the international commercialisation of news has led to the public becoming increasingly cynical about the motives of politicians. One of the more negative impacts of infotainment and celebrity culture, has been the increasing public disengagement from politics and voting.  The visual medium of TV has contributed to the focus on superficial conflicts, the strategic framing of politics as game, and the insertion of well-known journalists into the story.

Running interference between politics & the public

“Name” journalists have become a proxy for the public voice, disempowering potential voters. When continuously associated with political news, they gain a superficial aura of authority, trust-worthiness, and expertise in interpreting the news.  This was seen during the recent Labour Party conference, when TV3’s Patrick Gower led his own reality show exposé. He repeatedly thrust a microphone in front of David Cunliffe in an attempt to dramatically uncover an alleged leadership coup. The more important story about the democratisation of the Labour Party was side-lined.

Democratic political parties could look for ways to embrace the positive potential of blogs, in order to re-engage with the public. It was a promising development to see the consideration of the potential of  “new” media  at the NZ Labour Party Conference, towards the end of a speech by Judy McGregor. However, she seemed to see participants in electronic networks as an elusive, docile, loosely-affiliated population, unwilling to commit to the hard slog of party work; people whose voting choices are based on superficial assessments of personality and single issues.

In fact, well-moderated blogs enable ordinary people to become part of an extensively networked conversation: one that connects politicians, media stories, party members, and potential voters, while generating enthusiasm for political action on- and off-line.