Nat-onomics: $30 million up in flames 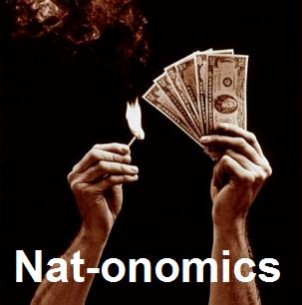 Vernon Small calculates that if the Cullen Fund had continued getting its monthly contributions, rather than just the one-off $250 million the government gave in July, we would be $30 million better off by now. That’s even more than the $24 million I calculate, but I’m only using figures up to December (the most rent ones used to be on the Cullen Fund website but they’ve disappeared).

Predictably, the financially illiterate Key apologists are having a cry about being shown to have stuffed this one up so badly. Take National Party pollster David Farrar:

“The taxpayer may have been able to make a gain of $30 million if it had borrowed more money, for the fund to invest. That is certainly true, but it is a potential gain only.”

Yeah, in the same way that failing to put money in your personal savings account is only giving up a ‘potential’ gain in interest or applying the brakes when you had the chance could ‘potentially’ avoid a crash. It still counts. Or maybe in Farrar’s world there’s no consequences of not doing something.

“You can not automatically assume that any additional investments would have achieved the same return as the existing investments. An extra $2 billion may have been invested in a stock that did not do so well, or may have meant a higher average price for buying such stock.”

Nor can you automatically assume that it wold have done worse like Farrar does. The best guide to the additional return the Cullen Fund could have earned is the return it made on the money it did have.

“It is fair enough to talk about a potential gain or that was missed, but that is not the same thing as stating that potential gain as a loss let alone a cost. That is a sloppy short cut.”

No. Take this example: ‘not putting $1,000 in my savings account and spending it on sherbet instead cost me $50 in interest’. Now, upscale: ‘not putting $150 million a month into our collective savings and, instead, giving tax cuts to the rich has cost us $30 million in returns so far’

“One could borrow $10 billion a year to invest in stocks, and probably get a good return on them. But it would also be risky.”

Strawman. No-one’s talking about mortgaging the house to go gambling. We’re talking about continuing to put money into our retirement savings even though we also owe money on a lower-interest loan.

“What we don’t know if whether or not we would have got a credit downgrade, if the Government decided to continue to borrow money to invest. And if we had, then that would have had a very real cost on every New Zealander.”

If we had made this investment, it would have lowered or net debt. You don’t get credit downgrades for lowering your net debt. And our gross debt was never out of control. Indeed, National still thought it had enough money to cut taxes for the rich.

“It is also worth noting that over the entire life of the fund, the rate of return is still below the risk free rate of return. The NZ economy would be hundreds of millions of dollars better off if the fund had never been set up, and the money used to repay debt.”

Over its life, the return on the Cullen Fund has been slightly less (0.06%) than the cost of borrowing. That’s $9.5 million – not ‘hundreds of millions’ (remember, people pay this guy to do polling) – and an amount that would have been wiped off by now if the contributions to the Fund had continued. But, hmm, what caused the Fund’s value to drop after stellar gains in its first few years? Oh yeah, the largest recession in 50 years happened.

Yeah, the value of the Fund’s holdings went down then but, guess what?, it got to buy up a whole lot of assets at once in a lifetime prices and since the March of last year (that’s right before last year’s Budget) it’s been turning profits. Between March and December last year it made a 31.7% return compared to a cost of borrowing of 2.3%.

Yesterday, I joked about the only people who couldn’t work out that canceling contributions to the Cullen fund when National did was a mistake were those who mindlessly buy National’s spin and those who need to take off their socks to count past ten. I missed a group, Farrar’s ravings suggest that National’s spinsters believe their own spin. Sad, really.