National fights for its right to outspend others? 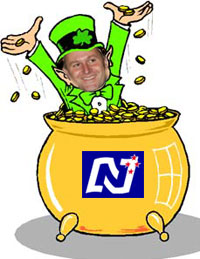 I was having a look at David Farrar’s National Party blog this morning and I came across an interesting comment from one of Farrar’s regulars about why National might be so keen to knock over the Electoral Finance Bill. I’ll make it quite clear right now I’ve got my issues with the bill but I couldn’t figure out why they’re fighting so hard to stop it when it wouldn’t touch their anonymous donations. Have they come over all democratically minded?

Well maybe not. Take a look at what “Robinson” said:

“DPF: A little birdie tells me that National is against the EFB because they’ve already got $2.1m in their war chest and are worried they won’t be able to use the way they want to if the campaign period is extended to the start of 2008 – is this true?”

I’ve checked a few more of Robinson’s posts and he seems, like so many other Farrar posters, to have a bit of a screw loose at times but it got me thinking about what National would have to lose and what happened to all the money they had put aside for that two-election strategy Nicky Hager talked about in his book?

I guess if they’ve really got more money than they can spend during an authorised election period then they’ll want that period to be as short as possible so they can get in early with some form of off-the-books campaigning: a whole lot of Iwi/Kiwi type billboards perhaps? But if the campaign clock starts Jan 1 2008 then they’re going to have a whole lot of dosh and no way to spend it. I’m not sure that’s the “level playing field” they’re all so keen on.

Oh, and DPF never answered Robinson but as a National Party insider I suspect he knows what the Tory war chest is up to. If anyone else does please feel free to email me at fenianbill@gmail.com (I’ve got a couple of reporter mates who’d love to know).

2 comments on “National fights for its right to outspend others? ”