The National Blue Green conference was on on this weekend.

There was a bit of a kerfuffle within the Greens’ ranks when former Green MP Kennedy Graham accepted an invitation to speak.  I don’t think too much should be read into it.  He is the brother of former National cabinet minister Doug Graham and I am sure the arrangement was easy to make.  And all parties should be made to confront climate change and get their heads around what is needed to address this most terrifying of phenomenon.

National’s problem is that wittingly or unwittingly it refuses to accept that urgent action is required now.  It has at least moved on from denial.  But its current response is couched in the turgid language of compromise and it is clearly not wishing upset its right wing base, its farmer lobby or its corporate friends.

At one level I can understand this.  Because National’s supporters are always resistant if not hostile to change.

This recent article by Jamie Morton in the Herald exemplifies the problem.  From the article:

More Kiwis want action on climate change than at any time in the past decade – but large numbers still don’t see a need to deal with it now, or even at all.

Horizon Research’s latest poll was carried out after New Zealand’s hottest summer in recorded history – and some of its findings have concerned a prominent climate scientist who says the world is running out of time to act.

Of 1164 adults surveyed nationwide last month, 64 per cent believed climate change was a problem, and 29 per cent of those thought it was an urgent problem.

But 30 per cent thought it was problem for later or not one at all; a result that suggested more than two million Kiwis were concerned about climate change, but 960,000 weren’t so worried.

The concern is down 12% from a decade ago although higher than it was recently.  It seems a decade of National Government has sucked some of us into a false sense of security.

Horizon Research broke down beliefs by political support and this produced some surprising results.  Below is the graph. 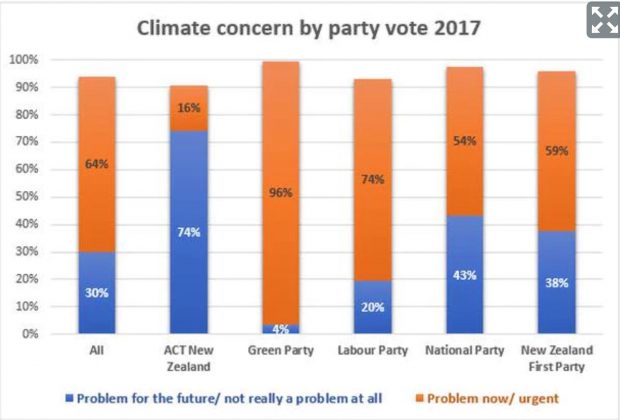 Even a majority of National supporters (54% to 43%) thought that climate change was an urgent problem or a problem that needed action now.

ACT supporters were the only political supporters where a majority did not think that climate change was a major problem but this should be tempered by the understanding that it must have been hard to find enough ACT supporters to make the result statistically significant.

And I would be keen to interview the 4% of Green Party supporters who thought climate change was a problem for the future and not now.

But it shows why National accepts that it has to be seen to be doing something.  The question is, how much is the minimum that they have to do before they start unduly upsetting their supporters and the corporates and farmers?

This is something that Simon Bridges attempted to address in his speech to the Blue Greens Conference.

From Joel Ineson at Stuff:

National leader Simon Bridges has pledged his party will have a strong environmental focus with a broadchurch approach to thinking.

“It’s important that we are pushing the envelope and that we hear from thinkers from a whole range of perspectives… We want to make sure that in Opposition we’re thinking things through and challenging our thinking and resetting things in some places.

Bridges challenged his party, staff and supporters with “resetting our approach to environmental issues”.

He said a strong economy, education, healthcare and social services were not worthwhile “if we’ve ruined the environment”.

“Good environmental practice is crucial for securing the type of future we want for our children and grandchildren.

Every piece of rhetoric in the above passage is designed to say the right thing to the public at large.  But after this the rhetoric starts to drift away from the reality.

Bridges was “proud” of the work the previous government achieved during its nine years, introducing an emissions trading scheme, Predator Free NZ and the Environmental Reporting Act, but a continued and ramped-up effort was needed.

I don’t know if that is sloppy reporting or a misspeak on Bridges part.  For some reason I cannot find his speech on the web or any of his speeches for that purpose.  But the fifth Labour Government introduced the Emissions Trading Scheme.  National amended the scheme twice, the first in 2009 and the second in 2012.

The first changes were described in a New Zealand Herald editorial as an “emasculated version of a cap-and-trade scheme” and as a  “miserable offering to the international effort”.  And the Sydney Morning Herald, hardly a beacon for environmental enlightenment said that the ETS had been “significantly watered down” and that it gave “big polluters a much easier ride”.  The changes allowed for the unrestricted importation of overseas credits, something that caused international ridicule and opprobrium.

The second changes made things even worse.  The two-for-one unit surrender transitional measure was extended indefinitely beyond 2012, the entry of agriculture into the scheme was deferred indefinitely.

And how was National’s performance in relation to reducing climate change gas emissions?

Pretty appalling as this graph shows.  We are not on track to meet our requirements, we are not even being a fast follower.   We are part of the problem, not part of the solution. 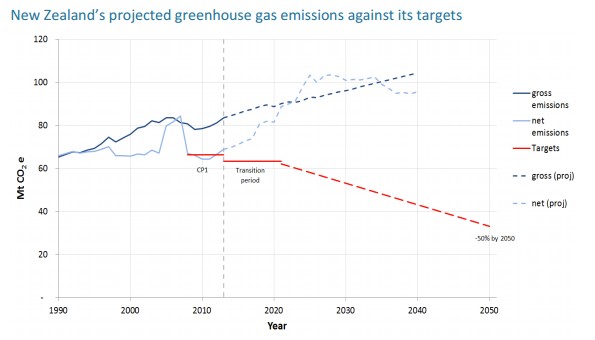 National has clearly moved on from the old rhetoric of denial.  But its latest rhetoric, that there needs to be “balance” is designed for more of the same obfuscation and foot dragging.

34 comments on “National is yeah nah on climate change ”