Despite women being 51% of the population, and it being women who won National the last election, they are still showing their contempt for us.

State Services Minister Tony Ryall decided that pay equity isn’t important, dropping a study into why female public servants are still paid less than their male counterparts in the same job with the same qualifications. His justification? Pay equity investigations could apparently “generate an additional form of remuneration pressure that is unaffordable in the current economic and fiscal environment”.

Well Mr Ryall, I would rather see women receive a fair deal, and if you can’t afford to spend more, wouldn’t it be fair to at least ensure any pay reviews or new employments result in women being paid the same as men? I would rather see men paid less if it means pay equity.

But actually, I think the worst part about dropping this study is that Tony Ryall didn’t even consult the Minister of Women’s Affairs, Pansy Wong. Women’s affairs isn’t really a ministry there is very little stand-alone funding for it ($4 million per year) its purpose is to be a voice for women in all portfolios. Not consulting the Minister of Women’s Affairs on something so blatantly relevant to her portfolio makes me wonder exactly what she is there for, and what she is consulted on. At least Don Brash was up front and honest about wanting to scrap Women’s Affairs.

Along the same lines, Labour Minister Kate Wilkinson has scrapped the Department of Labour’s Pay and Employment Equity Unit. Her justification? Apparently “good employers will work to tackle it”. Well clearly New Zealand employers are not good employers, because women in New Zealand are still paid on average 12% less than men.

ACC are cutting the funding from Auckland Sexual Abuse Help’s 24 hour support line. Auckland Sexual Abuse Help answer calls 24 hours a day, often emergency situations where a woman rings up and says she has just been raped. They will provide someone to support her through everything while she goes to the police station to complain, while she makes her statement to a (probably) male police officer, while she goes through the ordeal of having a forensic examination at the hospital, when she fronts up to testify in court and they will provide her with ongoing counseling if needed.

National made a huge song and dance about the Plunket line funding being cut, despite there being another service doing the same job. Yet here they are cutting a vital service that will no longer be provided if funding cannot be found somewhere else.

The recent budget also reduces the training incentives allowance, largely given to women on the Domestic Purposes Benefit who want to get back into the work-force. I’m pretty sure this, and the cuts to adult community education will hinder our ability to get out of the recession.

When National brought back royal titles, they could have at least amended the really sexist parts, like (Hat Tip: Stargazer at The Hand Mirror):

There are a whole bunch of other policies which disproportionately effect women. I’m sure I have missed many of them, but they include appointing Christine Rankin to the Families Commission, cutting adult community education, deporting women for getting pregnant, cutting overseas aid, merging NZAID back into the Ministry of Foreign Affairs and Trade, not inviting women’s groups to the jobs summit, and not increasing the minimum wage. 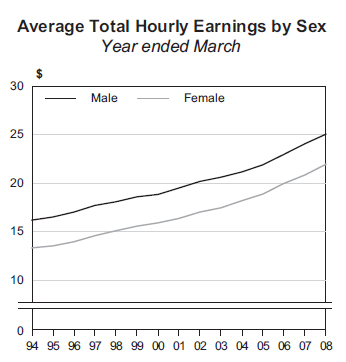 UPDATE: Following the debate in the comments thread on the pay equity stats, the best I can find is this from Statistics NZ. Women are paid less than men, and not just because they work less – this is pay per hour. However I am still keen to find stats on comparable pay for the same level of job.