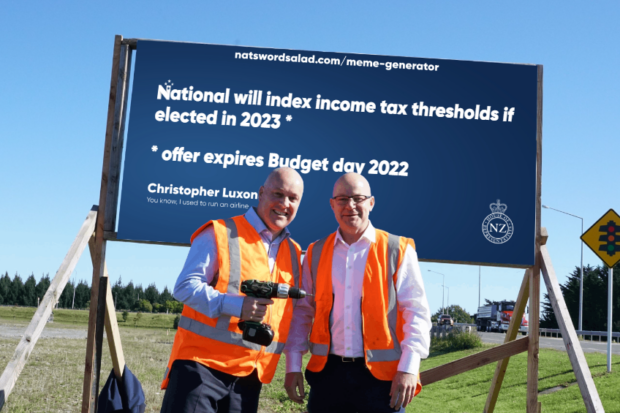 Chris Bishop has recently accused Labour of engaging in dirty politics.  Because, and I am being careful to describe this accurately, Labour has poked fun at National’s problems with presenting a coherent position on tax.  He should read up about New Zealand’s recent history which has a very clear example of what Dirty Politics is.  And this is not Dirty Politics.  It is a case of Labour pointing out what a shambles National’s position on tax cuts is.

A fired-up Chris Bishop has come out swinging at Labour for claiming National had dropped its tax policy and says his party is fully behind leader Christopher Luxon after a turbulent couple of weeks.

Luxon has this week come under fire for his party’s stance on tax cut promises amid reports his National Party had dumped its policy of adjusting tax thresholds to inflation.

“We haven’t dropped our plans to index the tax thresholds to inflation and we haven’t dropped our plans to reduce the tax burden on New Zealanders. It’s just a Labour Party smear because they want to talk about everything other than the appalling cost of living payment debacle that they’ve unveiled in the last week… so it’s a scam campaign that the Labour Party is running,” Bishop told Newshub Nation on Saturday from the National Party’s annual conference and AGM in Christchurch.

My perusal of what happened last week would suggest that Bishop’s criticism is misplaced.

Last Wednesday Christopher Luxon was still espousing tax indexation as a means to deal with cost of living pressures even though the proposal would make him significantly wealthier but only result in a $2 a week benefit for the average tax payer.

Then on Thursday Finance Spokesperson Nicola Willis confirmed the policy was “on the bench for now, with the party working up a new tax policy for the next election”.

But later that day the tax cut was reinstated.  And Chris Bishop then made his outlandish claim.

I like to think of it as us just pointing out National's incompetence. https://t.co/qGf46kKiOv

The whole incident suggests strongly that National’s caucus are not a happy group and that the factions are fighting over policy direction.  And it is clear that National is struggling how to work out how to meet promises to increase spending on health and education and at the same time deliver significant tax cuts.  The numbers simply do not add up.