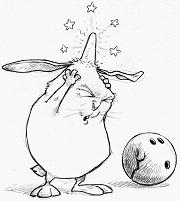 A bad week last week from John Key got worse this week as other National MPs joined Key in a game of drop the ball.

Last week, Key didn’t know his party’s Waitangi and Maori seats policies, and was slippery on the Auckland Airport issue before finally coming down on the unpopular side of the issue, supporting foreign control of New Zealand strategic assets. This week, he was determined not to repeat the mistake. When the New Zealand Fast Forward R&D fund was announced to universally acclaim, there was no slipperiness. Key adopted the unpopular position immediately; opposing the Fund. He then made some comments about the Fund getting the money from the Reserve Bank that are truly bizarre coming from a guy who’s meant to know something about money.

Following Key’s example over the â€˜wage drop‘ quote, other National MPs tried to expunge telling quotes from the record. David Carter told the Rural News that National would privatise Landcorp. When that was printed he was straight on the phone to the reporter attempting to have the quote retracted. Bill English, announced National would re-sell the railways if they are bought back off Toll and criticised normal government bond issuing before finding himself ‘pleading‘ with Barry Soper to not play an interview in which he let slip that ‘we aren’t that worried about whether the Crown needs to borrow a bit of money [for] tax cuts’. APN management helped Key cover-up his â€˜wage drop’ quote, to journalists’ chagrin, but Carter and English have had no luck getting their damaging quotes â€˜clarified’.

To top it off, Key’s â€˜we won’t hire more prison guards and we’ll have doctors doing their own filing’ speech was overshadowed by National MP Brian Connell’s â€˜fuck you, no fuck you’ interview with Kris Faafoi.

With the Golden Boy mask slipping, Key looks horribly underdone and inept under pressure, and his colleagues don’t look any better. Is this guy up to the task of campaigning, let alone being Prime Minister?