When historians look back at the records of the fifth National Government I think they will agree that the past week was their worst to date. The weeks when Dirty Politics was released and when Judith Collins’ ministerial career was terminated were bad ones but at least they were able to fight back and bluster as if there was nothing to worry about and they were in control.  This week there has been no effective bluster, no counter attack, just a series of defensive manoeuvres trying to minimise the effect of a series of devastating blows.

Serco has dominated. After a few weeks of devastating bad news and a clear sense that the miracle of private enterprise was not delivering the improved result at a cheaper price the avalanche of bad news was devastating. The death of Nick Evans and the impression he was transferred while dying to a state prison so that he would not hurt the corporate bottom line, evidence of drug taking, alcohol brewing, gang intimidation, the dropping and beating up of inmates, the sense of complete chaos in a prison because corporate interests mean that staffing levels are less than they would be in a State prison, this will hurt.

Even during the past 24 hours there have been further revelations of possible gang rape and of rampant drug taking and the ready access of drugs for sale.  And Serco staff do not seem to care.  They seem to be more interested in not seeing or having to report episodes of violence or drug taking.

The techniques used to smuggle goods into the prison clearly show how cellphones and drugs could have been introduced.  And the filming of the consumption of one

And the sleeper issues are how Serco was considered to be the top performing prison, and how this can be reconciled with data suggesting that the incidence of violent incidents and attacks on prison officers was the highest in the country, not to mention the incidence of inter inmate violence or the fact that a riot was not recorded as being one. You get the feeling that Serco’s management are not recording incidents the way they should be.

Then Hekia Parata’s decision to respond to a recommendation that she close a poorly performing charter school by paying it even more money was publicised. These guys are not amateurs. This decision could have been delayed. Releasing it today suggested a decision was made that things were that bad they may as well dump a few bad news stories and hope that the wash would mean they both disappeared without too much accentuation of the story. But this is a shocker. These guys are meant to be economic and managerial geniuses and they are meant to take no prisoners and let the invisible hand of the market decide. But this decision suggested strongly that they are willing to spend public money to avoid political embarrassment.

The other stories that will hurt are two court decisions. The first was a comprehensive spanking of the Government’s decision to discontinue the Problem Gambling Foundation’s funding.  Sure it had criticised the Government’s decision to legislate to allow Sky City significant gambling concessions but in a democracy this should not be a problem.  Although then National backbencher Tau Henare thought it did. 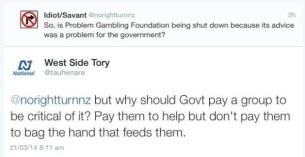 Andrew Geddis at Pundit summarises the finding in this way:

So, to summarise, the High Court has just told us that the PGF lost its government contract after being very vocally critical of government policy through a process that;

This is, remember, the process that Peter Dunne defended as “robust, independent, it’s been peer reviewed and it’s probably one of the better processes that has been undertaken in this area for a very long time.”

Kind of a different story to that some members of the commetariat were telling at the time, isn’t it?

The decision always had a feeling of a crude political hatchet job and the decision, expressed in the most careful language possible, reinforces that feeling.

And the second case to embarrass the Government and interestingly Tau Henare was the declaration that Tau’s bill removing the rights of prisoners to vote was contrary to the New Zealand Bill of Rights Act.  Unfortunately the decision is no more than that and the law is not changed.  Although there must be a moral imperative for the Government to repeal this particular Act, at least if it was interested in respecting human rights and the rule of law.

Again Andrew Geddis has provided informed and succinct comment on the decision.

In a nutshell, his honour finds not only that the decision to remove the rights of prisoners to vote limits their right to vote (obviously!), but also that this decision cannot be “demonstrably justified in a free and democratic society“. That is to say, the effect of the measure is so arbitrary and inconsistent that it cannot rationally be defended … it is (to put it colloquially) a crappy thing to do.

The decision could be considered a pyrrhic victory as the law is not actually changed by the decision.  But there is now a moral imperative to change the law.  As Geddis puts it:

However, it does mark the judiciary’s formal legal finding that this law (while still the one they have to follow) is BAD LAW. Parliament has done something that a properly functioning legislature simply ought not to do – taken away peoples’ rights without having a good reason for doing so. And the High Court is looking them right in the eye and saying so.

Now, of course, Parliament (or, let’s be honest, the National Government) may stare back and say “so what?” But it shouldn’t. It really shouldn’t. Because this is about more than just getting a political boost by beating up on prisoners (an unfortunate phrase, perhaps, given what we’re learning about Mount Eden … ). It’s about what good government entails, and the way that public power can legitimately be exercised.

In a nutshell, where a Court is expressly telling the lawmakers that they have failed, that shouldn’t be something to just get shrugged off with a brusque “we don’t have to listen to you”. It’s a warning that the Government and Parliament owe it to us to listen to and take very, very seriously.

So in a week where we saw the destruction of National’s privatisation policy of social policy, the spanking of National’s undermining of the Problem Gambling Foundation and the ruling that  National’s legislation removing the rights of some prisoners to vote was a breach of the country’s human rights we can safely conclude that this was the week from hell for National.

May they have many more.

43 comments on “National’s week from hell”