As I posted a couple of days ago, John Key’s networks of influence incorporate people and multinational corporates involved in the potentially damaging exploration for oil in NZ. Today Werewolf published a well-researched and damning article by Gordon Campbell.  Campbell exposes the false claims of Anadarko Petroleum, which is involved in oil exploration in NZ.  As was questioned by both MSM journalists and several bloggers at the time, John Key held a “secretive” meeting with James Hackett, (Anadarko Petroleum boss) in November 2011.  Patrick Gower reported on it, bloggers such as Frank Macskasy critiqued the association of Anadarko with the major BP oil spill in the Gulf of Mexico in 2010.  Metiria Turei raised her concerns. 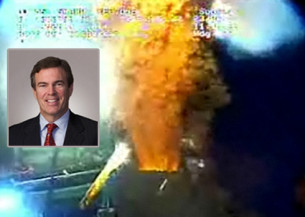 Gordon Campbell’s excellent piece of journalism on Anadarko, shows that we cannot trust corporates like Anadarko to operate safely in NZ waters. With their record of falsehood and misinformation, we cannot trust anything said by Anadarko people.  They have shown a callous disregard for the safety of their workers and the environment.  They have made slippery use of legal niceties in trying to avoid taking some of the blame for the massive 2010 oil spill.

Anadarko were also involved a in a dubious sleight-of-hand operation in acquiring the bankrupt operations of Kerr-McGee.  This included an attempt to distance itself from damaging chemical leaks by cycling Kerr-McKee through a newly constructed firm of Tronox prior to it being acquired by Anadarko.  Kerr-Mckee has a long history of causing toxic damage to the environment and human lives, including the radiation contamination that was dramatised in the movie Silkwood.

Anadarko’s directors are connected to a diverse range of networks, including energy, science, business think tanks, the US military (including space and cyberspace operations), Kerr-McKee, electronic data systems, investment companies, financial servies and banks. Their NZ operation, Anadarko NZ Taranaki, is a branch of a company base in the Cayman Islands.  This is just one of Anacarko’s international operations.  Their Moroccan enterprise, also based in the Cayman’s lists their address as being headed by “The Offices of Maples Services Limited”.

Maples and Calder says this about their Corporate Services, boasts of the internationally “seamless” legal services that they provide to their clients. So I guess they are behind the legal slipperiness that Gordon Campbell critiques in his article. Campbell says:

The over-riding issue at stake here is whether Anadarko’s history as a corporate citizen in any way justifies the welcome mat being put out for it by the Key government. Not to mention the insulation from protest action that is being extended to it at the expense of the civil rights of ordinary New Zealanders, and with the related risk to our environment.

Anadarko made false claims about their years of experience in deep sea drilling.  They falsely claimed their role in the Deepwater Horizon (BP/Gulf of Mexico/Macondo) disaster was that of “passive” investor.

At the very least, Anadarko was a central part of the decision making process (together with BP) via a Joint Operating Agreement, that led to safety breaches and cost cutting, which directly resulted in the disaster. …

Anadarko had tried to evade liability in this court action, via a tissue of extremely fine legal distinctions. For a New Zealand reader, the interesting point being that these arguments indicate what standards of proof – and what definitional niceties – would be necessary if this company was ever to be held liable for an environmental disaster off the New Zealand coast.

It should also be noted that Robert B Daniels is listed as director of Andarko NZ, since 2010, and also of the Moroccan branch of Anadarko.  In his article Campbell provides evidence of Daniel’s untrustworthiness.  He cites the class action taken by Anadarko shareholders over the BP oil spill, in which they provide evidence that Daniels falsely claimed Anadarko had no responsibility for the spill.

It’s interesting also to note that Daniels was one of two Anadarko speakers at the Advantage NZ Conference at SkyCity earlier this week*.  The NZ Herald reported on Daniels’ contribution to the conference.  First the Grant Bradley article reports on the conference speech by Michael Bromwich, who had been “the former US prosecutor who was selected by the Obama Administration to beef up offshore drilling regulations“.  In his speech he claimed regulations had been tightened since the 2010 Gulf of Mexico oil spill, and that oil companies had excellent resources and provisions for cleaning up oil spills.  The evidence presented by Gordon Campbell says otherwise.  The fines imposed on companies for spills are minimal in comparison with the companies’ profits.  They are easily able to absorb them, and have the legal resources to resist any subsequent court actions.

Bromwich said he was not familiar with the New Zealand regulatory environment, but he said regulatory regimes needed to be adequately funded.

However Campbell shows that Key’s government are under-funding its regulatory regime.  Campbell says:

On this point of Anadarko’s ability to sustain any fines imposed on it, one should note in passing that the maximum penalty under the new New Zealand legislation is $NZ10 million …

One has to ask – what, exactly, does the Key government think is the deterrent value of a $NZ10 million fine ( even if the maximum culpability could be proved ) to a company that can evidently ride out a $US4 billion fine (at least) on Tronox ? (In 2011, Anadarko also paid out a further $4 billion in full settlement of its liabilities to BP over the Deepwater Horizon spill.) By comparison, New Zealand’s fines seem to be little more than coffee money….

As reported by Bradley, Daniels claimed Anadarko has the resources to “respond to” a spill in NZ waters, and the financial resources to comply with any changes in regulations under a possible Labour-Green government.  I’d be more interested in learning about Anadarko NZ’s systems for preventing any such spills.  It’s worrying that a man and company that already have shown they are cavalier about damaging impacts of their activities, claim to be able to cope with (inevitable?) spills

So, here we have, another example of Key’s personal engagement with powerful networks of influence: ones that do not have the interest of New Zealand, Kiwis, or the environment at heart.

It should be noted that, as well as meeting with Anadarko boss, Hackett in 2011, Key was also a speaker at the Advantage NZ Conference – the kind of context in which Key nurtures his engagement with networks of influence. A Prime Minister who supports such untrustworthy, slippery big oil companies, is a Prime Minster that can’t be trusted.

* The Advantage NZ website seems to have gone offline while I was writing this article.