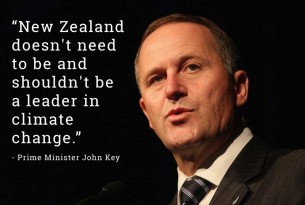 Well, no one can say John Key was talking up expectations with that statement. Just as well because, once again, New Zealand has won the “Fossil Of The Day Award” for being the most regressive country at the 2015 UN COP21 Climate Summit in Paris.

Thank’s John. That’s really something all us Kiwis back home can feel overtly patriotic about.