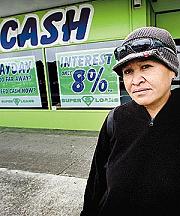 For any of you who thought the sharp end of capitalism was a nice place to be, the front page story in today’s Dom Post should change your mind. It’s about the lending practices of the loan sharks that have flourished in the twenty years since New Zealand had neo-liberalism foisted on it.

And it’s not pretty. According to the article Super Loans in Porirua is lending money to people at a rate of 8% per week. That’s 416% per annum. And it’s right across from the Work & Income office.

Of course this situation isn’t new. Porirua has six such ‘money lenders’ listed in its yellow pages alone. Manukau has 12.

Mt Victoria has none.

So you’d expect this not to be an issue for those who represent upper middle New Zealand but when Judith Tizard and the Labour party palm the issue off:

Consumer Affairs Minister Judith Tizard said the Government was monitoring the situation – especially in Australia – and planned a discussion paper, but ruled out a cap on interest rates.

You’ve got to wonder if they remember what side their bread is buttered on. It’s part of the folk law of the 2005 election campaign that it was the turnout in Manukau and Porirua and all the other places ‘Labour’s people’ live that gave them their third term. It would pay for them not to forget that.

So Labour put up legislation regulating loan shark parasites and see who opposes it. At the very least it will let your ‘people’ know who still stands for them.