John Key’s latest line is to whine that Labour and others (including this blog) are launching personal attacks on him, and would we please stop.

Our attacks are not personal, they are political. National wants to be in control of the Government, control an operation with a budget of near $60 billion and quarter of a million employees, and decide the laws that govern our lives. John Key wants to be the most powerful man in the land. Choosing a party to govern New Zealand is an important choice; this isn’t beach cricket where everyone gets to have a turn at bat. And, so, election year is like an interview process where the candidates are tested in three crucial areas:

Let’s look at the issues our posts on Key have dealt with (incidentally, only 16% of our posts are about Key): 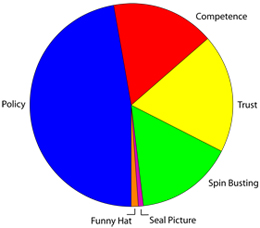 These criticisms are political, not personal (apart from the funny hat and the dead seal). Compare that to the abuse that the rightwing blogs fling all the time. In the last week alone, Whaleoil and others have referred to Labour Ministers as fugly, abused others on their sexuality, called Labour members corrupt, and worse things that don’t warrant mention here.

It doesn’t matter whether of not Key is a nice person, what matters is whether he has a good plan that he is able to implement and can be trusted to implement, as well as whether he can cope with the pressures of being Prime Minister. All the evidence shows that PM Key would be a disaster for New Zealand. Sorry, John, nothing personal.

74 comments on “Nothing personal, John ”