NRT: This is what happens if you don’t have a plan

I/S at No Right Turn on the renewables target and futility of targets without plans:

This is what happens if you don’t have a plan

Radio New Zealand reports today that the electricity industry thinks the government’s 90% renewables target is “unrealistic” and will not be met. This has been apparent for years. In 2010, the government’s Energy Outlook – its modelling of electricity supply and demand to predict future needs – showed that we were never going to meet that target, and this was repeated in its draft 2015 generation and demand scenarios. And the reason is simple: because while the government set a target, it had no plan whatsoever to reach it. Instead, it relied on the market, which (while its moving in the right direction) is moving much slower than expected.

If the government was serious about this target, it would have backed it with policies: a thermal ban, a higher carbon price to drive existing thermal generation out of the market, mandatory renewables certificates to provide an additional revenue stream, or feed-in tariffs for wind to provide security for investment. Instead, they rolled back those policies, revoking the thermal ban and crippling the ETS. To the extent we’ve had progress at all, its only because Tiwai Point is threatening to shut down – and that’s a mixed blessing because it has also stalled new investment.

But the fundamental problem is that the government doesn’t care. Sure, they’ll set a renewables target – but like their climate change targets, it’ll be far in the future, when current Ministers expect to no longer be in government and therefore cannot be held to account for their failure to meet it. IBGYBG – and someone else will be left to clean up their mess. 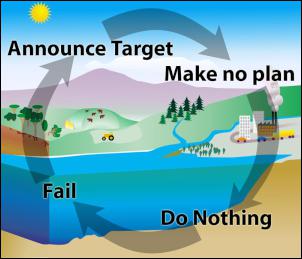 4 comments on “NRT: This is what happens if you don’t have a plan ”