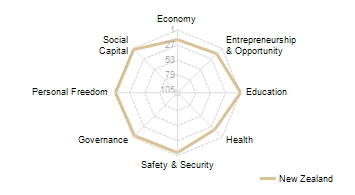 looks beyond GDP, a failed measure that counts rebuilding after an earthquake and building prisons as gains. The Index is a broad measure of nations’ prosperity comprising 88 components. It shows that New Zealand is a relatively prosperous nation. It also shows that relative prosperity is falling under National.

In 2009, New Zealand was ranked the third-most prosperous nation in the world, behind only Norway and Denmark. In 2010, using the same methodology, we’ve fallen behind Finland and Australia as well.

It’s notable, as you look at the 2009 vs 2010 scores, that the all declines among the top 10 are countries led by right-wing governments. We’re down from 3 to 5, Canada from 6 to 7, Ireland from 9 to 11 – vastly different experiences of the recession but all mismanaged.

I dug into the sub-components of the Index to see what makes the more properous countries better off than us:

There’s heaps of measures where we’re tops though:

Interestingly, we’re also the most religious of the top five with 27% of people attending church weekly vs 12% in Finland. I’m not putting that as good or bad, just interesting 🙂

For me, the message is clear: if we want to be a more prosperous country we need a fairer distribution of wealth which improves the economy but also encourages people on lower incomes to believe in the system and discourages crimes; we need to control our economic destiny by saving ourselves and not borrowing from abroad; we need to invest more, especially in high-tech R&D.