NZ has best value for money education in the world

Generating a false crisis to justify their ideological policies is a classic rightwing tactic. Key gravely pronounces the system is ‘broken’ and their policy is the solution. Education has been victim to this bullshit. But OECD stats show that we have the best value for money education in the world. How will National justify their ideological assault on teachers now? 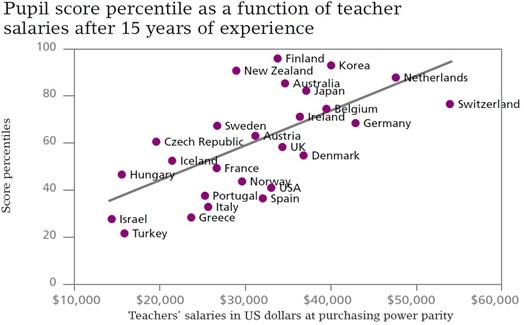 The broader lesson of the graph is that societies that value teaching (as reflected by teachers’ pay) have better educational outcomes. Better salaries attract more and better candidates, and better salaries indicates a better funded system overall where teachers have the resources they need to teach.

But when we look at New Zealand in particular, we see it is an extraordinary outlier. We have the 15th highest teacher salaries and get the 3rd best results. If you want to see this in value for money terms, we have the best in the world, right along side Finland, which is regarded as the model educational system by all but rightwing ideologues. Either we just happen to have extraordinarily good teachers compared to the rest of the world or (more likely) we have a very good system.

Both our countries have achieved this success with ‘bottom-up’ models where teachers have a large degree of freedom over what they teach and successful practices spread by emulation rather than teachers being forced to ‘teach to the test’ – 19th century-style rote learning.

But National is attempting to change that. It’s National Standards is a copy of the system that sees the US and the UK spend more on teaching to get far worse results. National scoring coupled with league tables and performance pay, the next phases in National’s education agenda, have broken the cooperative model of teaching in those countries, which works so well here. They have replaced it with a model where teachers and schools are financially incentivised to compete rather than cooperate and to make sure that their students can jump through the hoops for the standards, even if their wider education suffers.

Why would we want to shed our successful system and imitate failure? Because, for National, this isn’t about education. It’s about attacking teachers and teaching.

Why are National so intent on attacking the profession that educates our children (who also happen to be the next generation of the workforce)? Is it a crude anti-intellectualism? Is it that they just want to break the union? I reckon its all part of the Right’s long game. Much more than the Left, the Right excels at breaking the bases of the Left’s support. They did it to the unions and now they’re trying to do it to the teaching profession. They want to corporatise the system and disempower teachers so that the profession is no longer a source of Leftwing thinkers, activists, and future leaders.

Wait, you didn’t think this actually had anything to do with improving education, did you? We’ve already got the best bang for buck education system in the world.