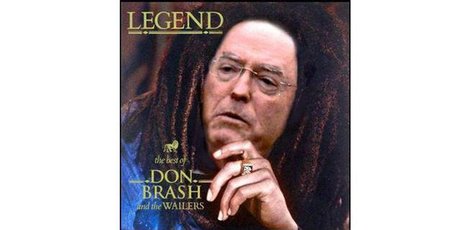 Don Brash is in the news again complaining that a certain sector of our society may be receiving some sort of privilege. He is claiming that the decision not to prosecute Josie Butler for throwing a fake penis at Steven Joyce is because she is a young Maori woman.

She regarded it as a joke, [but] I don’t think it is a joke throwing something at a minister…

“Had it been a brick, hopefully she would have been prosecuted, the fact it was a sex toy apparently doesn’t warrant prosecution.”

He had heard suggestions that Butler’s race and gender may have played a role in the police decision.

“The cynic says that [Butler] was not charged because she was a woman, or perhaps because she was Maori – I don’t know, that’s the cynical reaction – whereas the guy who threw the brown stuff at Gerry Brownlee was a male Pakeha.

“Whether there’s anything in that, I don’t know, but I’ve heard that comment voiced by a number of people.”

Holy shifting goalposts. If it had been a brick or a molotov cocktail or a grenade then I am certain that she would have been charged. But it was a fake penis that did nothing more than squeak slightly when it hit Joyce.

The police have a discretion not to charge.  The trifling nature of the incident and Ms Butler’s youth and previous good character were relevant considerations.  And Joyce does not appear to be too traumatised by what has happened.

Someone send the gif over to John Oliver so we can get it over with..

This case is entirely different to the Christchurch assault on Brownlee which was more distressing for him.

And the claim of privilege is ironic coming from someone like Brash. Maybe he is more concerned that it is being shared around rather than it exists.