On referenda and democracy 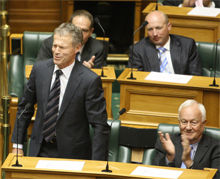 Parliament: As good as it gets?

I have to disagree with the guest post below, which argues that because citizens’ initiated referenda tend to be brought by groups peddling an interest (so what?) and often deal with complex issues we should just put them in the too hard basket and leave it to the politicians to sort it out.

Somehow, that’s supposed to be ‘real democracy’. Sounds more like elitism to me. It’s my firm view that if the Left has a future it’s in fighting for greater democratisation of our society, whether in our political decision making, in our workplaces, in our communities or in our schools.

We know from our experience that people are intelligent enough to make complex decisions, and that armed with the facts they will make sensible choices. We also know that the people who wield the most control over our lives, both elected (politicians) and unelected (business), are capable of making appalling decisions, even when in possession of all the best research and with the best education behind them. The current economic meltdown is a case in point.

Yes, referendum questions can be stupid, but that can be tightened and probably will be by Sue Bradford’s bill.

Yes, there is a danger that well resourced groups can use their disproportionate wealth to hijack referenda by using expensive advertising campaigns and professional PR that other groups can’t afford. The example of Peter Shirtcliffe and his anti-MMP campaign comes to mind.

There are plenty of options. We can make sure that any citizen’s initiated referendum comes with an extensive public education programme. We can look at limiting spending by interested groups. We can require referenda to first go before a citizens’ assembly. We can devolve decision making power down to local community groups. And so on.

Democracy is supposed to be about giving people power over the decisions that affect their lives. If we’re really committed to democratising society then we can find a way to make it work. The job for the Left is to get that discussion going and to start developing policy to make it happen.

64 comments on “On referenda and democracy ”