On Shooting the Messenger 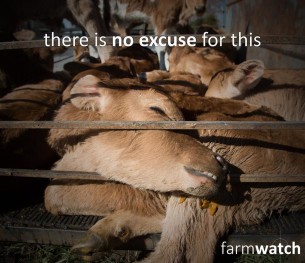 It is an unfortunate reality that speaking out publicly often has considerable repercussions both for individuals and for organisations. Over the past decade we have seen sophisticated attacks against academics and NGOs who challenge government or industry. These attacks often appear organic in nature, but many times are in fact concerted efforts by the powerful.  I believe that these attacks have a chilling effect on democracy, making it a costly undertaking to speak out against those in power.

Since Farmwatch and SAFE released footage of cruelty within the NZ dairy industry we have been subjected to a sustained and deliberate attack, with attempts to discredit and undermine our work. Publicly the dairy industry has remained friendly, saying they are taking the issues seriously and that they want to work with us to clean their industry up. Privately though, they are saying something very different.

Within minutes of TVNZ’s Sunday expose going to air Farmwatch began receiving hate mail, but as well as this a range of pro-farming Facebook pages instantly appeared, many of them openly targeting SAFE. As an example, one of the most popular ones is “Farmers against SAFE –  We love our animals”. This is the public face the industry wants to portray, with the bulk of posts showing farmers posing with their cows (as if this disproves the footage we found), but these pages also have a more negative side. These pages have contained offensive pictures, comparisons to Hitler and ISIS, abusive messages to financial sponsors, as well as a huge focus on SAFE’s finances.  Sandwiched amongst the happy photos of cows is an undercurrent of hatred towards animal rights activists because of what we exposed. This has escalated to the point where personal contact details have been circulated amongst farmers, many threats of violence have been made, and farmers have talked publicly of trying to track down animal activists.

As disappointed as I was with the vitriol and attacks against us I still hoped that industry bodies were operating in good faith, and focusing on sorting out welfare issues as they claimed. However on Friday 11th December “Farmers against SAFE” posted a letter purported to be from Federated Farmers in which they encourage farmers to sign a petition to get SAFE de-registered as a charity. Puzzlingly within the same email Federated Farmers tell farmers to focus on positive stories and not to be “anti or against anything”. Even within their own communications there is doublespeak going on, claiming the moral high ground while attempting to shut down the organisations who publicised both deliberate and inherent cruelty within their industry.

In a radio interview that same day the Minister for Primary Industries Nathan Guy engaged in the same ploy saying that farmers are understandably frustrated and have taken their outrage to social media as a result. He said pages had been set up called “caring for animals” and “proud to be a farmer,” neglecting to mention that a key purpose of these pages is to attack SAFE. Nathan Guy also said that we sat on footage for two years, insinuating that we had prevented the investigation of animal abuse. The minister is attempting to come across as concerned about animal welfare but is doing his best to undermine the credibility of this investigation and is supporting those who are more explicitly attacking us.

Ironically there are two opposed attack lines being used by MPI, Dairy NZ and Nathan Guy – first that we are ‘mis-representing the industry’ – and second that we are holding onto footage for ‘our own purposes’.  Therefore as an investigator I am in an impossible position – I can either gather enough evidence to prove that abuse is widespread or I can hand over the first, tiniest scrap of evidence – I cannot do both.

That we are not acting fast enough has become a ubiquitous line of attack with industry leaders saying that we are “hugely irresponsible” for not immediately going to the authorities with what we found.New Zealand’s Special Agricultural Trade Envoy Mike Peterson has taken this position to the extreme, calling SAFE’s actions “grossly irresponsible” and saying that we should hand over footage “within hours of obtaining it”. Requiring investigators to hand over footage immediately is akin to requiring police to go and arrest someone the moment they have the smallest piece of evidence against them. Coming from the top these fallacious arguments have fed through onto social media with thousands of farmers repeating these ad hominem attacks.

The small amount of footage that we filmed in the 2014 calving season was standard, common practice and was filmed from the side of the road. The crate of calves left out for hours, dying in the sun, was on a busy rural road for all to see. The few instances we filmed of calves being loaded onto trucks occurred in public on the side of the road. If we had reported these instances to MPI we would have been laughed at. Indeed the inspector I am working with at MPI has said that the 2014 footage (which the minister was so concerned about) is a “low priority” and that they have not begun looking into it.

This year we did come across extreme abuse at a small slaughterhouse which we thought was urgent and occurring in private, and as a result we made the decision to cut our investigation short and hand footage of this over to MPI. We believe MPI didn’t take this seriously until several months later when media coverage and nationwide outrage forced them to take action. The minister has placed a much higher burden on activists than his own ministry in respect of taking immediate action regarding this abuse, given that MPI did not intervene immediately or even within a reasonable period of time. When I asked about this delay, I was told by an MPI inspector that they had spent over two months gaining legal advice about the prospects of using the footage in court. If the minister is so concerned about people sitting on footage should they not have intervened immediately after we contacted them to prevent further abuse occurring?

Amongst all of this it must be remembered that Farmwatch is a handful of volunteers who do not have the resources that MPI and the dairy industry have. Our investigators have poured thousands of dollars of our own money into buying the equipment we use. How is it that a car full of part-time volunteers can find such widespread abuse and the industry apparently be entirely unaware of what is going on? TVNZ journalist Ian Sinclair described the situation well when he asked Fonterra’s Miles Hurrell “If a bunch of enthusiasts with a camera managed to pick all of that up, whereas a main player in a $15 billion industry didn’t, what went wrong for Fonterra?”

It is also worth pointing out that Farmwatch was very busy in 2014 exposing cruelty in pig farms across the country. The Minister reacted angrily against us then too for not coming to MPI sooner and promised immediate action. Shortly after this expose screening I was back on a pig farm retrieving a hidden camera, the shocking footage we obtained showed a pig being beaten to death. Mindful of the Minister’s attack when we saw what was on the camera we decided to hand the footage over immediately. Despite contacting MPI before I had even had a chance to sleep properly it took months for MPI  to quietly announce that no prosecutions would be taken. Afterwards I wrote about MPI’s failure to take action against any of the farms we exposed last year and what I believe were deliberate lies in order to discredit me.

John Key has also joined in on the attacks accusing SAFE of “economic sabotage”. Writing about the attacks by the Prime Minister on SAFE, Dr Margalit Toledano points out that the use of language such as treason is dangerous as: “Traitors are traditionally punished by the death sentence. Using such delegitimising labels might result in violent responses, or in silencing of important critical voices.” While I cannot hold the Prime Minister or industry leaders responsible for the threats of harm we are receiving I do believe they are feeding these attacks by the way they seek to portray us.

As well as directly targeting Farmwatch and SAFE, farmers are also going after those who support us. The Facebook page “People against SAFE” who are responsible for the anti-SAFE petition recently gloated about forcing a small company to stop donating to SAFE. The business owner said they were suspending donations to SAFE because her “staff were getting upset” due to the abusive messages they had received, she said to pass this message on to whoever had been spreading the name of her business around. These sorts of attacks against SAFE have been occurring for years but are becoming increasingly targeted and now have thousands of supporters funneled to them by industry leaders.

Animal rights activists are not the only ones who are the victims of sustained attacks by the agricultural industry. Environmental scientist Mike Joy has come under similar attack for pointing out the degradation of our waterways is caused in large part by the dairy industry. Cameron Slater who is often used as a mouthpiece for industry has gone so far as to say he should be “taken out and shot at dawn”. Like us Mike Joy has had his findings dismissed by the prime-minister as unrepresentative and has also been accused of economic treason.

I have no problem with farmers trying to present their side of the story, but what is going on is far beyond that. Farmers, the Minister and at least one industry body are engaged in underhanded attacks aimed at destroying our credibility and are trying to weaken SAFE financially. Rather than focusing on cleaning up their act they are engaging in a concerted PR offensive. In the previously mentioned letter Federated Farmers say that “the combined industry response” has included “regular conference calls and discussions on this subject since we first found out about the programme 5 days prior to it airing”. I believe that through these conference calls the industry has developed a two-pronged strategy – to publicly say they want to work with Farmwatch and SAFE and privately to do whatever is in their power to prevent us from surviving long enough to expose abuse in future. The petition calling for the removal of SAFE’s charitable status now has over 10,00 signatures – something which would cause any charity to assess the cost of speaking out in future.

As a society we benefit from NGOs and activists being able to speak freely about issues which are of major concern to communities/society. To allow those in power to threaten to shoot the messenger, whether literally or figuratively, is to accept that many important issues will not be raised. I believe that the Minister must be held to higher standards and that farmers and the dairy industry should focus on addressing the abuse we found, rather than attacking those who uncovered this abuse.

214 comments on “On Shooting the Messenger ”