On the flag – lets not have one

Over at The Wireless, Pencilsharp has put up a longish cartoon about this daft public relations stunt by John Key and his minons on changing the flag. As he points out (click on image to go to the Wireless), it appears that the main reason that John Key brought this bit of political stupidity up is to divert attention from relevant issues that we can’t vote on. 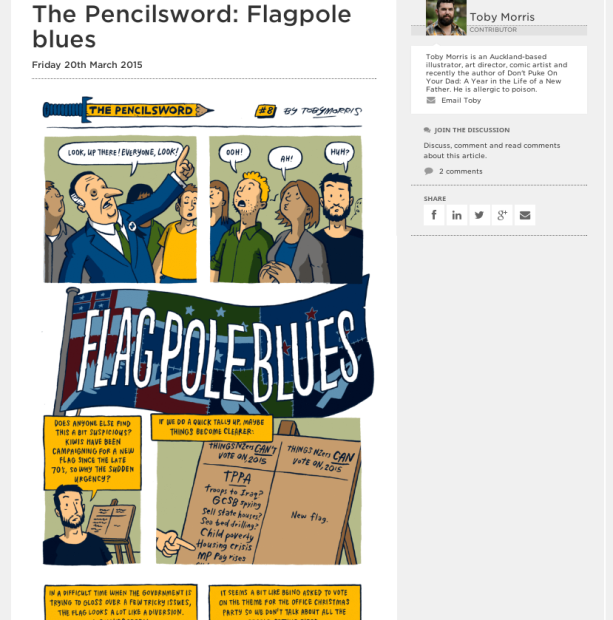 Pencilsharp goes through a lot of the flag issues. Bar one.

My  question is “Why have a damn flag at all?”.

I can understand the logic in history for them. They were battle standards in the days when the battlefield was a standup with little guile and a need for visual communications. But in the types of battle that have been common over the past century, sticking a flag up just helped to provide the enemy with points to aim at – with grenade launchers, artillery, and airstrikes.

Having flags on the battlefield has long been out of favour. Certainly we trained for in my army time nearly 40 years ago and I haven’t seen them in any realistic military training since.

Later they became “national” flags when the politicians of the day wanted people to turn off their brains and become “patriotic”. This appears to be the main use that John Key and his minions have for it, mostly as it relates to sport.

One thing that I am quite proud of in our kiwi culture is our relative lack of a conditioned patriotic knee jerk reflex. We don’t wander around like other cultures saluting some linen each day as children as part of a state operant conditioning process. This is a good thing because it means that as a culture we are far more mature about when and how we get into conflict.

Our relative lack of flag induced stupidity is quite distinctive when you run into other cultures. And it has probably saved us from a lot of aggravation in my lifetime.

You only have to look at the military and diplomatic messes over the last century that the USA with its obsessive flag saluting culture has managed to produce to see the downstream effects of that. But in our history, my great grandparents had such an obsessive flag culture and ran headlong into the machine grinder of the first world war.

The lack of a conditioned flag bearing culture in NZ has a lot to do with our currently evolving culture.

These days about the only place that a flag really has use in our culture is in sport. Based on friends who are addicted to being armchair activists for this cause, raising a flag appears to be used as a signal for some suspension of realistic expectations. Just as going into a darkened room at the cinema is a signal for a similar suspension of disbelief. But any kind of symbol is useful for that. I’d suggest that the haka is a much more satisfactory and relevant one.

Sure, a flag has symbolic power. That doesn’t mean that we should allow people to exploit that. As far as I am concerned it appears to be a signal for the onset of collective stupidity. Apart from cynical moneyman manipulators like John Key – why would we want that?

I don’t define myself by a flag, and I know bugger all kiwis who do. Given a choice, I’d vote for not having a state flag at all. Lets see how our culture evolves with that. But I sure as hell can’t see why changing our flag at the forced behest of John Key has anything to do with our culture and society.

If we don’t get that choice, then just vote against changing the flag. The old one is kind of boring. Lets hope that its relevance will continue to wither away over time.