Just a month into the Government’s housing insulation programme and John Key has had to launch an inquiry into rorting by contractors who are taking the subsidy but also increasing their prices, and so pocketing a good part of the subsidy themselves rather than passing it on to the consumer as intended. That’s a bad outcome because it doesn’t decrease the cost of insulation to homeowners as much as could be, and so fewer people are taking up the opportunity than otherwise might.

Why didn’t the Key Government see this coming? Basic economics tells you that without controls in place to prevent it any subsidy will be at least partially kept by the supplier – the tighter supply is (ie. the less elastic it is) the greater the portion of the subsidy the suppliers will keep. 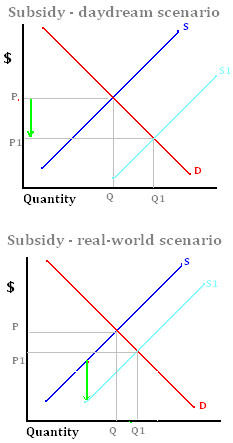 Here’s how it works. The higher price the higher supply (S) and lower demand (D).

Now, add a subsidy (thick green line). In dream world, all this subsidy is passed on to the consumer, so the price falls by the full amount of the subsidy (P->P1) and the suppliers supply the amount demanded by consumers at that price (Q->Q1).

That’s pretty basic stuff. It’s what happens if you just hand a wad of cash to suppliers and say ‘here, this is to pay for part of Jack and Jane’s insulation’ without any controls or oversight. It’s how markets work, why would the supplier pass on all the benefit to the consumer? They probably can’t afford to anyway because demand at the fully subsidised price would out-strip their ability to supply at that price plus subsidy, and they don’t need to because all suppliers are running full tilt – rather than being price takers, the suppliers have a lot of market power, they can charge higher prices if they choose, bringing down demand but pocketing more cash themselves.

The Key Government should have seen this coming and set up mechanisms to prevent it, such as the government doing the insulation itself with sub-contracting if need be as a monopolistic buyer. Again, this looks like more sloppy work from this government, with the result that what is meant to be assistance to make Kiwis’ homes warmer has become a gravy-train for business.

45 comments on “Padding pockets, not houses ”