National’s line is that they are doing ‘everything possible save jobs and keep people in employment’. Are they living up to the promise?

The other week Paula Bennett was asked in the House how many jobs had been saved by initatives from John Key’s ‘Jobs Summit’. She proudly replied ‘223’, then corrected herself ‘303!’.  303 in three months. Meanwhile, at least 1000 extra people a week are joining the dole queue. In fact, the government has fired at least five times as many people as the number of jobs as it claims to have saved. The economy lost 26,000 jobs in the March quarter and probably lost at least that many in the last quarter.

Let’s put those numbers in perspective. 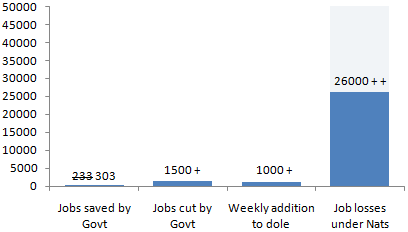 Over-promise and under-deliver, that seems to be this government’s motto.
-Marty G