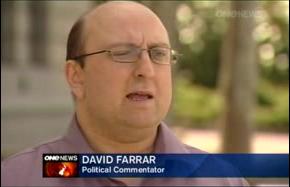 You do have to wonder sometimes who’s making the judgment calls in our newsrooms. Last night One News decided to use a National Party staffer, David Farrar, to comment on a poll that showed the Maori Party leading Labour in the Maori seats.

As you’ll see in the picture, Farrar was introduced as an independent ‘political commentator’. Not once during the segment, which involved criticism of the government, were Farrar’s party political biases revealed. This for a man who is on the National Party’s payroll, runs a pro-National blog from their headquarters, spent years working for the party in Parliament and is a life member of the Young Nats. David Farrar is a political operative, and he’s National Party to the bone. He’s certainly not an independent commentator.

That it’s come to this is no indictment on Farrar personally. He’s spent years building up Kiwiblog as the National Party’s online messaging hub, and judging by its popularity and influence he’s done a bloody good job of it too. You can hardly blame the guy for taking advantage of an opportunity to do the same thing in the mainstream media under the guise of independent commentary. The real fault lies with media outlets that should know better.

One News isn’t the only guilty party here – Farrar is regularly trotted out as an independent ‘commentator’ on Newstalk ZB, Good Morning and the Herald on Sunday, among others. Recently he practically co-authored an article for the Dom Post with Tracy Watkins.

This isn’t good enough. The public have a right to know whether they’re hearing an independent political analysis or being served up the recycled lines of a party hack – it’s something that goes to the very core of our democracy. Is a little disclosure too much to ask?