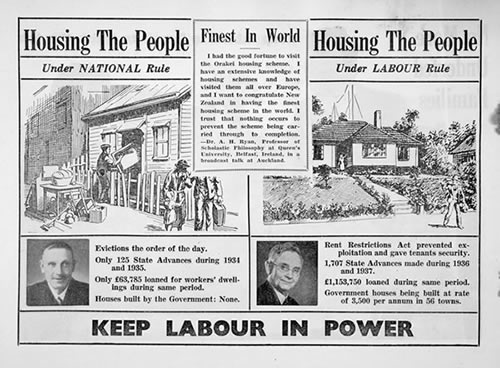 Now, New Zealand faces some of the same conditions as existed at the start of the first State housing building programme, albeit with the higher expectations of the 21st century while there is no housing shortage, landlords who bought state houses off National in the 1990s have allowed them to degrade, the bottom tier of housing stock does not meet modern health standards, and the housing construction sector is pulling down the rest of the economy. New issues of peak oil and climate change mean we also need housing for low income families that is energy efficient and coupled to good public transport.

The Government has been working in this area the Hobsonville and Tamaki projects will build over 6000 homes along with schools, businesses and reserves, and it is looking at other areas for large scale developments by itself and non-profit groups. Yesterday, Michael Cullen signalled more big projects could be in the pipeline and it is thought a shared equity plus scheme is in development whereby the State retains ownership of the land, lessening the cost of buying a house.

This is great news. A good housing stock underpins a well-functioning, sustainable society. But these developments need to be done right, using housing designs that are healthy and low-energy and urban design that discourages crime and gives public transport primacy. If done well, these developments could be the model for housing in the low-carbon, peak oil future.

Not each house in these new developments needs to be State-owned, some could be sold to families with the help of the shared equity scheme, but a significant state holding ensures there is decent housing for those who can’t afford to buy even with government help. A condition on privately-owned houses could stipulate that they must be owner-occupied, not rented out which would keep prices down and ensure their quality is maintained.

Done right, Labour’s housing policy can deliver for the people, the economy, and the environment.

88 comments on “Positive moves on housing ”