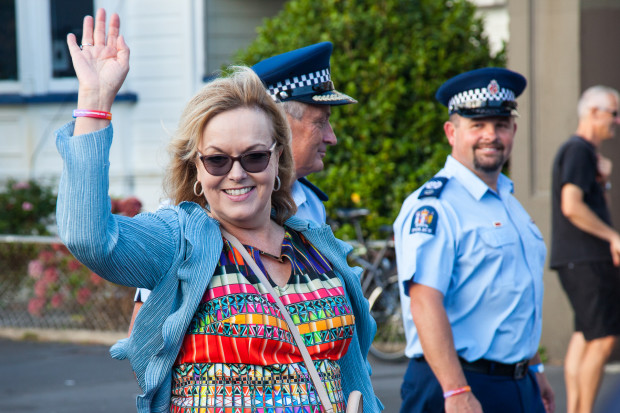 Over the past two weeks the New Zealand LGBTQIA+ and takatāpui communities have had one of the most divisive and difficult conversations of our time played out very publicly. At the centre of the media coverage is the decision by the Auckland Pride Board to request that the New Zealand Police attend the 2019 event wearing something other than their uniform, whether that be an alternative t-shirt or civilian plain clothes.

While many have jumped at the chance to comment on this issue, the New Zealand media has (mostly) erased the context, nuance, and implications of the substantive debate.

Since 2014 the New Zealand Police have marched in uniform during the annual Auckland Pride Parade, however not without backlash among rainbow communities.

Opposition to the police participating in the event is grounded in concerns around the ongoing institutional violence faced disproportionately by Māori, the ongoing abuse and mistreatment experienced by the trans community at the hands of the police, the past criminalisation of gay men and trans people, and the systemic racism, transphobia and homophobia within the New Zealand Police.

By their own admission, police have work to do.

In 2015, police commissioner Mike Bush admitted the police hold unconscious racial bias – and by 2017 despite two years of police recognising this, there had been no reduction in the number of Māori being arrested.

According to the New Zealand Police’s Tactical Options Research Reports in the year that police first marched in uniform, 2014, Māori were 7.01 times more likely to be the victims of police brutality than Pākehā (including but not limited to physical force – open hand and baton, TASER, dogs, and firearms).

In 2015 that factor increased to 7.1x more likely to be the victims of police brutality.

By 2017, Māori felt the violence of the New Zealand police 7.7x times more than Pākehā.

While we await the release of the 2018 report, it is undeniable that these numbers are moving in the wrong direction. Māori are feeling institutional violence at the hands of the New Zealand Police more acutely now than before the police vowed to do better during these discussions with Auckland Pride in 2014, 2015, 2016, and 2017.

In addition to the worsening police brutality figures, during the first six months of 2018 there were 1992 formal allegations of police misconduct, an increase of 21 percent on the same period in 2017. Within those figures there is no break down of what parts of our society these allegations are coming from. This becomes an issue for LGBTQIA+ and takatāpui people as we are entirely reliant on anecdotal evidence to track whether the situation for the rainbow community is getting better – and academic research resoundingly finds that the vast majority of these incidences towards queer and trans people will not be reported for fear of further victimisation.

What we do know is that trans New Zealanders are routinely asked to remove their make up in police custody, commonly misgendered, subjected to strip searches by officers who do not reflect their gender, experience physical and sexual assault at the hands of the police and are far more likely to have their accounts of sexual and domestic violence ignored.

New Zealand Police responding to a trans woman’s call for help after being abused by her husband. When the Police arrived, he told them he had just found out she was trans and that is why he had assaulted her. They had been married for ten years and this was entirely untrue. The Police left without providing any assistance for her, despite visible evidence of the recent assault she had experienced.”

The report goes on to state:

There are indications across surveys that lifetime sexual violence experience for trans people may reach 50%, and that trans women of colour are most likely to be victimised” and that “the criminal justice system was unlikely to ever be widely used by Rainbow communities due to concerns over discrimination and fears about how safe Rainbow perpetrators would be inside prison.”

What emerges from a survey of the evidence- whether it be stories of lived experiences or academic and institutional reporting- is despite the fights that have been won with homosexual law reform and marriage equality there are many queer and trans New Zealanders who continue to experience the worst elements of the New Zealand Police force.

Many of these concerns echo the elements that were at play when Marsha B. Johnson, a black trans woman and self-identified drag-queen, threw the first brick of the Stonewall riots on June 28th 1969, widely regarded as a pivotal moment in the international movement for queer and trans liberation. In June 1970 activists marked these events with a march highlighting mistreatment and abuse at the hands of the police. While the context in New Zealand differs, the international Pride movement has never just been about a celebration of gay identity, rather it has always centred the rights of queer and trans people to exist without persecution.

Over the past few months the Auckland Pride Board engaged in a series of four community hui and two open board meetings in which the issue of police brutality against Māori, takatāpui and trans people was repeatedly highlighted. This prompted a fifth “hot topic” hui to be called specifically around this issue. In response to the New Zealand Police submitting an application for the 2019 event, the Board requested that the Police do not march in uniform, instead wearing a t-shirt or civilian attire.

This approach is the same one followed by a number of Pride events around the world including London, Toronto, Calgary, Vancouver, Edmonton, Halifax, Durham County (North Carolina), Madison (Wisconsin), and Minneapolis (Minnesota). The approach allows for LGBTQIA+ police officers to participate proudly, as equals, without wearing a uniform that, to many, represents past personal trauma and institutional violence.

In response to this request, the New Zealand Police self appointed National Diversity Liaison Co-ordinator Tracey Phillips (who had previously attempted and failed to be elected to the Auckland Pride Board) issued an ultimatum – that the police wear their uniform or no police officer will march. With one statement the New Zealand Police exposed a belief that their participation in the parade wearing a uniform and the full branding of powerful state institution was of more importance than the full participation of the LGBTQIA+ and takatāpui communities for whom Pride is meant to be about. We know that many of those who have been victimised by the police will simply not see Pride as an event for them. Many will continue to feel isolated by a community with whom they fought along side for Gay and Lesbian rights. Many will feel as though the Police have revealed that their participation in Pride represented little more than a yearly pink-washed PR exercise, with little commitment to reversing the shocking misconduct and force statistics.

Immediately this story was framed as being one of ‘exclusion’ by the Auckland Pride Board – and very quickly language of ‘diversity and inclusion’ was co-opted by those who negated any analysis of power in their understanding of inclusion.

On Sunday 18th November the Auckland Pride Board held another hui, facilitated by an external independent mediator, focused on a community conversation around the decision. Very quickly racial abuse was thrown at both the board and those who spoke in favour of the decision, a Māori trans wahine was spat on by an older gay Pākehā man, and a vocal group tried to force a vote on the issue claiming that ‘majority rules’ should apply. For a minority community, who has a long history of discrimination, the irony seemed to be lost – if as a society, we based rights on majority opinions Homosexual Law Reform would have taken far longer than it did.

Immediately following the final hui, a Motion of No Confidence was submitted to the Auckland Pride Board and a concerted effort to bully the LGBTQIA+ community began. Since then we have seen the full force of the most privileged elements of the Gay and Lesbian communities fall behind this police-led boycott of the 2019 Parade. The Rainbow Charitable Trust (formerly the Gay Auckland Business Association) and other business associations have flexed their corporate power, leading to major funders to pull their support, citing concerns about the lack of ‘inclusion’ of the police force.

This boycott is an attempt to minimise and silence a discussion around what the future of queer and trans politics will look like. For many in our community it seems that personal comfortability and an uncritical notion of ‘inclusion’ has come at the expense of a serious commitment to upholding justice. To respect the very hard fought battles for civil rights that have already been won, our community must look very closely at who has been left behind over the last 30 years. Failure to do so is simply pulling up ladder behind us.

I refuse to believe that those, for whom I owe my rights, were fighting so that they could sit in business associations or in corporate diversity positions weaponising economic and social capital against those in our community who are the most marginalised.

None of us are free until we are all free.

If you want to support the takatāpui and LGBTQIA+ communities, consider donating to our Give-A-Little campaign which aims to raise community funds to replace those lost by this police-led corporate boycott.