Protest in the smartphone age

In the middle of last century, conflicts turned on their head. Before, the object was to kill as many of the enemy as possible and parade the fact to break both their will and ability to fight. The US body-counts in Vietnam reflected this. But the Vietcong were of the new era, the communications era. They had no ability to really degrade a superpower’s ability to fight, but, thanks to TV, they could break its will by undermining the self-justification of its cause – in other words, by convincing the American public and its political elite that what they were doing was wrong and/or not worth the cost. For the first time, your own side’s dead became useful. Images of American brutality and dead Vietnamese did more to advance the objectives of the Vietcong than those Vietnamese could achieve alive and fighting.

Although the scale and seriousness is obviously lightyears apart, I was reminded of that watching the footage of yesterday’s second Blockade the Budget demonstration. 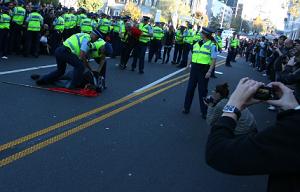 There seemed to be nearly as many people filming events on smartphones as there were frontline combatants. And that reflects the fact that the battle won’t be won by blocking a street for a while, or by even punching a cop or breaking some windows. Indeed, does far more to advance the students’ objectives to be punched by a cop than to punch one. Like the Vietcong, the students aren’t able to physically overcome the cops, but they can influence public opinion by being seen to be treated with unreasonable force by them.

That’s why the students (except for a few fuckwits who call themselves radicals but just don’t understand how to win) sit down when confronted with a line of cops rather than jostle with them. That’s what all the cameras are for – what the protest is ultimately for – to capture that moment of the agents of the State using unreasonable violence against a person with a just cause. And then beam that moment to the wider public to help convince them that the students’ are in the right and the government is in the wrong, with the final goal of forcing the government to backdown to avoid losing votes, or being kicked out of office and replaced with a friendlier government.

A demonstration used to be about demonstrating your numbers and passion (as a civilised proxy for martial potential). Now, it’s about demonstrating the abuses of power of the elite. That’s as true in Auckland as it is in Syria. It is the over-reaction of the elite (duly recorded and broadcast) that is the crucial ingredient and the demonstrators will continue pushing the elite’s buttons until they get it.

Like Dolan notes “effective guerrilla movements start out, a lot of times, with an attack that isn’t even meant to succeed in conventional military terms. It’s designed to create martyrs.”

The Syrian freedom fighters got it when the Assad regime unleashed the Alawite militia on Sunni civilians in Houla. The Auckland students got it when the Police reacted to the same protest they had allowed to occur without incident a week before by bringing in a hundred cops and the Paddywagons. (again, that’s not to equate the importance of what the Syrians are fighting for with the uni students’ fight, just the dynamic is analogous).

The Syrian freedom fighters look set to receive more international support. And public opinion looks to be strongly on the side of the students, thanks to the fact that everyone’s seen them treated unjustly by their opponents.

Mass media and, ironically, more accountable government, mean that, for the first time in history, being the underdog has serious advantages.

Just like the Vietcong and the Syrian freedom fighters, the students get the new battlefield, the media, in which they’re fighting, and the cops, like those Yank generals with their body counts, evidently don’t. The students are making a play to influence the opinion of group, the New Zealand public, that, unlike themselves, have the ability to exercise a meaningful degree of control over their opponents, the National government. 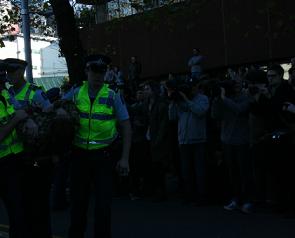 And the Police’s outdated tactics, like the body counts, play right into that strategy. Grabbing young people, shoving them to the ground, and giving them a bit of a boot maybe the traditional police response to student protests but it makes for ugly TV. Arresting 40-odd people only to release them a few hours later without charge looks like an illegal abuse of the Police’s powers of arrest. Threatening bystanders with arrest for documenting events looks like you’re anti-free speech. The Police have let themselves look like the aggressors (which they, in fact, are – not that the truth matters when we’re talking propaganda). That’s a big no-no in the modern era.

There are effective means to break insurgencies but those aren’t them (and I’ll be damned if I’m going to spell them out for the cops here).

So, what next for Blockade the Budget? Well, the membership will be swelling after the success last night and that brings with it a euphoric feeling. The danger is over-reaching. The Vietcong did it with Tet. The Syrian freedom fighters at Homs. They gave up their advantages and tried to fight on equal terms.

The worst thing the students could do now is try to pick a fight with the cops on their home ground. After the arrests last night, some 500 of them gathered outside the Police Station demanding their mates’ release. Luckily they didn’t try to break in. That would have been a tipping point where they would have gone from peaceful protestors, whom the public will side with, to a criminal mob, which the public will turn against. It’s not enough just to provoke a response from the State, it has to be an over-reaction and the students have to be seen as law-abiding for the message to sell to the general public.

So, choose next moves carefully. Remember that the cops are only proxies, not the actual enemy, remember what the objectives are (to force the government to change policy and/or damage its public support), don’t try to bite off more than you can chew, stick to a formula that’s working, and charge your batteries for those smartphones.

31 comments on “Protest in the smartphone age ”