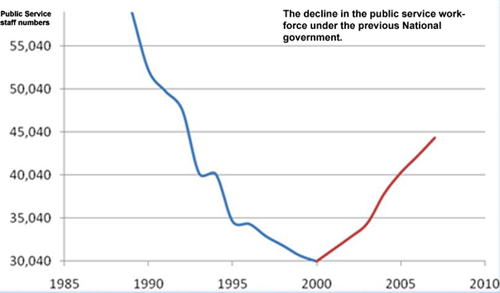 I’ve just stumbled across this killer graph from the PSA on public service numbers under Labour and National.

It helpfully puts in graphical form what we’ve known all along – that for all the bleating we’ve heard from National and its sycophants about how Labour’s bloated public service was sucking the nation dry, the reality is that all Labour did in its nine years was repair a small portion of the damage the Nats did in the 1990s.

You may recall that when Labour came to power the public service was a wreck. It had got to the stage that even the results of the 1999 election were delayed because the Electoral Commission was so badly underresourced.

Looks like we’re in for more of the same from National this time round. After all, they’ve gotta pay for those upper class tax cuts somehow.