Pull the other one, it’s full of sarin

New Zealand is, famously, a nuclear-free country. We’re also signatories to the Chemical Weapons and Biological Weapons Conventions, which outlaw them. 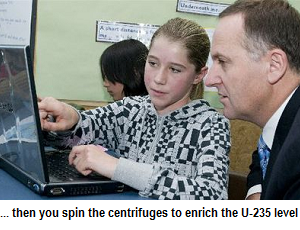 So, if you’re looking to learn about weapons of mass destruction, New Zealand’s the wrong place to go (hint: start at Wikipedia).

It’s even more laughable that some are repeating his lies straight-faced. Surely, any self-respecting member of the media knows by now that Key and the spooks will say whatever rubbish they need to say to cover their arses.

[Update: good on Andrea Vance for having the guts to straightup call Key out on this. Hmmm, that’s enough to convince me Key didn’t leak her the Kitteridge report after all]