Pumps are baulking at the price of gas too

As the price of our petrol continues to climb, having recently crossed the $2 a litre barrier, spare a thought for some US petrol retailers who have a whole other set of problems to contend with.

As the Washington Times reports:

The old mechanical gas pumps with scrolling dials at her country store in Fauquier County lack the gears to go beyond $3.99 a gallon. State inspectors shut down her diesel pump several months ago when the fuel topped the $4 mark, so now all that’s left are two pumps dispensing 87-octane gasoline, set at $3.75 — and climbing. 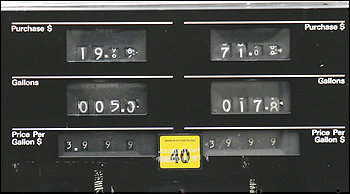 [UPDATE: doesn’t look like the future is much brighter for them either, according to the Wall Street Journal who predict that oil may hit $200 a barrel within the next two years, roughly doubling pump prices.]