Cross-posted from Graham Cameron at First We Take Manhattan.

In case you missed it, at the Greens annual conference in mid-July, Metiria fronted the launch of an impressive welfare policy, Mending the Safety Net. During that launch, she used an anecdote from 25 years ago to personalise the policy; when she was solo mum she didn’t tell Work and Income that she had flatmates so that she could retain the accommodation supplement.

It was a calculated risk, a chance to capture the news cycle, and if the last two weeks are anything to go by, it paid dividends. Every day there has been hand wringing and righteous anger from National and their proxies, sympathy from the Greens’ friends and the hashtags #IamMetiria and latterly #LeftwithEnough were an offensive defense of Metiria that dominated social media.

The attacks have been inevitably led by white and wealthy men who have stated that it is the crime of benefit fraud and should be prosecuted forthwith. It’s been a pile-on really: Barry Soper‘s written a self-congratulatory series of masturbatory metaphors; Martin Van Beynen claimed to not want to judge but then did; John Armstrong writes like he is the id of the Baby Boomers generation. The coverage has been overwhelmingly critical, not because of the crime, but because Metiria’s attitude is an attack on the comfortable narrative of the past quarter of a century.

The ideological narrative that was deliberately manufactured, particularly in the nineties, was that people who required a benefit of any description from the welfare state were flawed people. They had failed. They had not seized the readily apparent opportunities to make a positive economic contribution to our society and were therefore enemies to growth and productivity, and as such, enemies of ‘good’ New Zealanders. Beneficiaries are our modern day lepers: unclean, dangerous and infectious.

Whilst manufactured initially by a the second term Labour government and then Bolger’s National government, the narrative was quickly adopted by New Zealanders because it fits comfortably with our racist and sexist narratives: many beneficiaries were Māori, a violent and failed race who had consistently threatened New Zealand society; some beneficiaries were Pacific peoples, outsiders who stood at the barricades of white New Zealand trying to seize our riches and opportunities; many beneficiaries were single women, the promiscuous detritus of feminism that was a threat to the proper New Zealand family. If you need any further convincing, it’s telling how superannuation is not treated as a benefit in this regards, as the predominantly Pākehā elderly population don’t fit into the former narratives.

These narratives allowed governments to transform the welfare state. I know a few old social workers from the sixties and seventies. They are very clear that they understood their role was to provide an average standard of living so that families and people on a benefit had enough left over to engage in their local community and society. By the nineties and through to today, the welfare system became a system of punishment. We have condoned reforms that punish beneficiaries by decreasing benefit levels in real terms, reducing their potential for autonomy in spending decisions, and increasing funding to surveil and prosecute people on a benefit for infractions.

Just as lepers were a threat, now people who are on the benefit are a threat. Just as lepers must be excluded and controlled, so too we must control and exclude people on a benefit.

Metiria has unmasked this narrative. She has provided an alternative narrative: the lepers are the same as us. People on a benefit are caring and loving parents, children and grandparents who are oppressed by a system that is so punitive that survival often requires them to act in a dishonest manner; and the agencies of that system are unable to meet the real needs of those people because they are purposely designed to act as a barrier to support.

The reaction has not been because this is the first time that somehow has pointed to these alternative narratives. No, it has been because Metiria Turei, as co-leader of the Greens, has a real chance of being in a Labour/Greens Executive at the conclusion of the next election, and has expressed a desire to be the Minister for Social Development. In other words, she has the potential to have the tools to transform the status quo. So, as they have always done when faced with change, the defenders of the status quo are rallying to the cause with hate vitriol.

Meanwhile, Metiria is asking us to care again for each other. To have compassion for our neighbour and our whānau. To see ourselves in the other. To embrace the leper. Stacey Kirk described it succinctly:

“She’s effectively drawing an ideological line in the sand and asking New Zealanders: “Which side are you on?””

Each of us needs to ask ourselves that question in the coming election and vote accordingly. If you are going to vote for the status quo, for individualism, for gated communities of the like minded, for the current power arrangements, for the current economic system, for you retaining much whilst many have little, I have a warning for you. If we will not change to a path of generosity, then look to the recent Bastille Day celebrations and remember: a day of reckoning is coming, when all of your walls will fall and the many will take what the few have greedily hoarded.

[The image is an icon The Healing of the Ten Lepers] 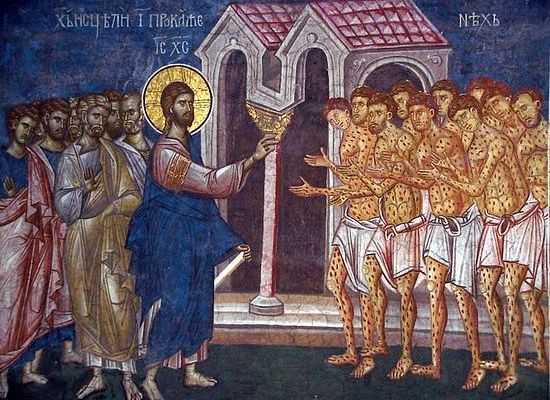