Reasons to vote against CERA

1) the powers given to Gerry Brownlee are excessive and unchecked. Dean Knight wrote the, so far, definitive critique of the CERA law in an amazingly short period of time after the Bill was finally released to the public on Tuesday. It is damning reading: the purposes clause is so wide and vague that it is effectively unlimited, the powers that can be exercised for those vaguely defined purposes are too extensive, there’s no effective ability for people to contest Brownlee’s decisions in court because the law so limits the jurisdiction of the courts that all they can do is check that those excessive powers have been exercised in pursuit of those vague, broad purposes.

Even if Brownlee doesn’t abuse his powers (and that is an ‘if’ that citizens of a democracy should never have to rely on) CERA won’t do what is needed. 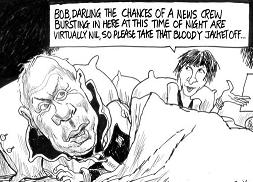 Now, Lianne Dalziel has commented that CERA is needed because the council has failed to come up with a rebuilding plan. I disagree. It has always been clear that the rebuilding plan would have to be government-led. The fact that Bob Parker is a vainglorious, preening arsehole is no reason to condemn Christhchurch and the country to the virtual dictatorship of Gerry Brownlee. The CERA bill as drafted is simply not the answer to the problems that no-one denies Christchurch is facing.

2) with such huge powers being entrusted to the government, and one minister in particular, we must be able to have complete trust in them. Has anything Brownlee has ever done instill confidence in you? He is perhaps the most high-handed and arrogant of Key’s ministers. He has shown absolutely no compunction in using his powers to their fullest extent and ignoring public opposition in the past.

Brownlee’s tendency towards secrecy was illustrated by the fact that he gave the Christchurch City Council CEO a copy of the CERA bill last week but with orders that it be kept from the elected councilors and the general public. Not to mention the insult of a select committee process we’ve just seen, where only Brownlee’s mates were invited and Christchurch councilors only found out it was happening from the media.

And look at what happened when Clayton Cosgrove commented that it looked like Brownlee was just doing the select committee for appearances and had no interest in listening to suggestions:

“The only conclusion I can draw is you’re going to do this your way. That you’re not going to take amendments seriously. “What’s the game? I would have thought you wanted detailed advice from key stakeholders.”

Mr Brownlee replied: “I don’t have a response to that. It’s an opinion. I’m not here to argue about an opinion.”

So what was he there for? A bit of PR cover so he can get on doing whatever he wants to do. Who can trust him to do the right thing?

3) Brownlee is going to make a mess of this. He is a disastrous minister. He fucks up everything he touches. He is a member of a popular government, yet he managed to raise the largest protest in a generation against his last big policy – Schedule 4 mining.

CERA is already a mess. The first guy that was tapped to lead it refused to work with Brownlee.

The progress on the ground has been rated a D by a New Zealand expert who has been involved in 17 major disaster responses. There still aren’t enough toilets. The government has twice missed its own deadlines just to announce who will build the temporary emergency housing. The Japanese have thousands of houses built already.

The word from inside National is that they expect to lose a lot of votes in Christchurch. It’s not just that people have high expectations today that are hard to meet, Brownlee is failing to meet even basic expectations. His majority will be slashed. Is the Opposition going to pick up more votes by jumping on Gerry Brownlee’s wagon as it heads for the cliff-edge or by raising principled opposition to the excesses of the CERA legislation and then offering valid criticism and alternatives as he fucks up again and again?

77 comments on “Reasons to vote against CERA ”