Red tape bonfire of the vanities 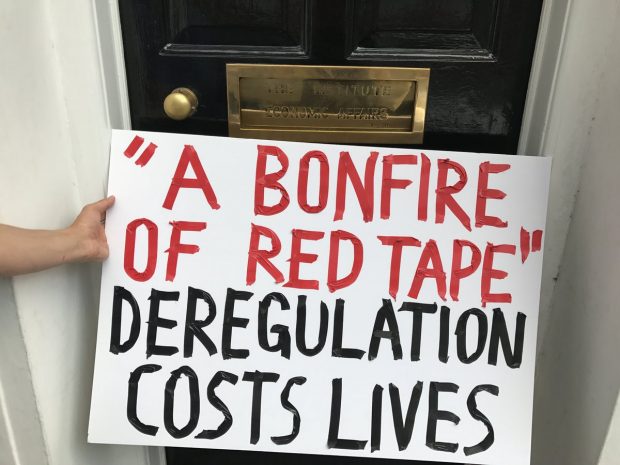 What is something that Donald Trump, Boris Johnson, Scott Morrison and Simon Bridges all have in common?  They all have pyrotechnic obsessions with regulations, including the leaky home avoiding sort.

It is something that Trump campaigned on:

One of Trump’s campaign pledges was to cut 75pc of regulation in a bonfire of red tape to help small businesses. This first step of this was his executive order, which mandated that for every new rule brought in by a government agency, two must be cut. The cost of any additional regulation must be completely offset by by undoing these existing rules.

The British conservatives have been engaged in a similar rhetorical battle.  From the New Statesman:

The Daily Telegraph has launched a campaign to cut EU red tape. Its editorial they decried the “vexatious regulations” that “hinder business and depress growth”, demanding that we ‘throw regulations on the Brexit bonfire’.

Such demands are not new. Beyond immigration, regulation in general and employment protection in particular has long been one of the key drivers of frustration and fury among eurosceptics. Three years ago, Boris Johnson, decried the “back breaking” weight of EU employment regulation that is helping to “fur the arteries to the point of sclerosis”. While the prospect of slashing employment rights was played down during the campaign, it has started to raise its head again. Michael Gove and John Whittingdale have called on the CBI to draw up a list of regulations that should be abolished after leaving the EU. Ian Duncan Smith has backed the Daily Telegraph’s campaign, calling for a ‘root and branch review’ of the costs of regulatory burdens.

And Australia is also getting in on the rhetoric although Scomo does not know whether to use fire or digestive metaphors.  From the Newcastle Herald:

It was as if no one, except Donald Trump, had ever thought of attacking red tape before.

Have they forgotten Tony Abbott already?

A bit over five years ago the then PM held the first of a series of Repeal Days in which, amid much chest-thumping, 12 bills repealing 9500 regulations and 1000 acts of parliament were introduced.

This Savonarola of the statutes spoke with relish about measures, mainly from Labor’s time in office, facing extinction.

So what is a poor conservative party in Aotearoa to do?  What else but do the same thing?

Trouble is though they tried this in the past and decided that there were not many loopy regulations after all.

And they may want to dig into the cause of current regulations before taking it too far.

National justifies the attack on regulations by referring to two unusual examples.  From the Press Release:

At their worst, poor regulations have the potential to stop important things from happening. This could be the construction of new renewable power generation or a new business starting up. For my colleagues in Auckland, regulations can hinder the building of much-needed homes in our biggest city. Insufficient or sloppy regulations can put us at risk, as we’ve seen here in New Zealand and overseas with the Grenfell Tower fire in London. Inadequate regulations need to be reviewed, and where necessary, fixed.

Regulations hindering the building of much needed homes should be referred to by their alternative description, regulations designed to prevent homes from leaking.  And the cause of the Grenfell Towers fire was a failure to comply with existing regulations rather than badly designed regulations.  I could not imagine a worse example to cite for the proposition that we need less rules.

But this is definitely business as usual for conservative parties. Hopefully the media will recognise what is happening.

19 comments on “Red tape bonfire of the vanities ”