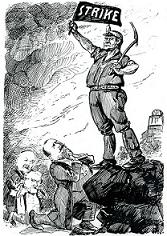 In 1908, the miners at Blackball took a famous strike over the right to take rest breaks at work. For most of the rest of the century this was enshrined in law and in our culture as a basic right of all working New Zealanders. That is, of course, until the National Government of the 1990s took away even our rest breaks in their drive to free us from the shackles of our employment rights.

Just a matter of months ago, that historic wrong was righted. On the 100th anniversary of the Blackball strike Labour passed a law restoring our right to regular breaks, much to the disdain of National and its allies in the business lobby. They didn’t complain too loudly at the time though, there was an election to win and a centrist facade to maintain.

Now their party is back in the saddle, National and the employer lobby are up to their old tricks. The Minister of Labour, Kate Wilkinson, today announced the Government would be amending the law on breaks to make it more “flexible”, which is 90’s code for bending workers’ rights to suit the bosses.

As usual, National has a line of spin to help the medicine go down. This time their pretext is that because the Airline Pilots’ Association and regional airports don’t agree on how to apply the new law the Government has to step in and weaken it for everyone. ‘It could lead to the cancellation of flights!’, screams Wilkinson.

Bollocks to that. Even if we accept the minister’s scaremongering as genuine, there are still plenty of options available to her short of taking away our rights. Three come to mind immediately:

1) Help facilitate a negotiated outcome to the dispute, including Government intervention if necessary.
2) Tell the regional airports to suck it up and hire more staff to cover people taking their rightful breaks.
3) If absolutely necessary introduce an industry-specific exemption to the law.

But this isn’t about solving a dispute between a small union and some regional airports. It is, as Wilkinson admits in her press release, about bowing to the “pharmacies, schools, meat works and sole attendant operations such as petrol stations” who have complained to her about the law.

Fact is, some employers don’t like having to give people breaks. More importantly, they don’t like their employees having the right to take breaks. Nothing is more upsetting to the authoritarian mindset of the small-minded boss than an employee who knows their rights and insists on enforcing them.

Lucky for them, the bosses’ party is back in power. And once again the legacy of Blackball is under attack.

18 comments on “Rest-breaks under attack ”