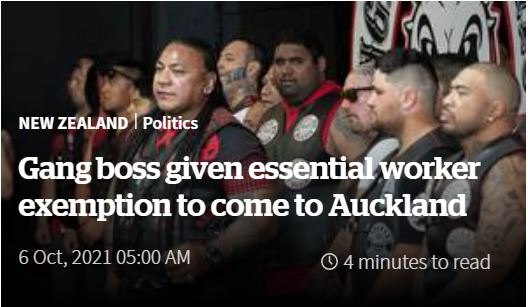 News that the head of Waikato’s Mongrel Mob chapter was given an essential workers exemption to travel to and around Auckland recently has attracted derision from the usual quarters.

Jason Walls reported this in the Herald:

Newstalk ZB can reveal the [essential worker’s] exemption was granted to Sonny Fatupaito – who’s been working with some of the harder to reach communities in the city, such as those with gang affiliations.

In a statement, via a spokesperson, Fatupaito said he has been liaising with health officials and police to assist in reaching people in communities within the gang’s chapters and their whanau in Auckland.

He was asked to travel to Auckland by South Seas Healthcare, who have been co-ordinating much of the response to the South Auckland clusters.

“This required immediate intervention from the senior leadership in the Waikato Kingdom, and this onsite intervention ensured compliance and welfare assistance was provided as needed.”

He confirmed he had been given an exemption to travel across the Auckland boundary and he did so “under strict Covid-19 protocols, enforced by health officials and the police”.

No doubt National will go to town on this.  With barely disguised contempt Judith Collins said this morning that the Government “had been calling Sonny Fatu from the Mongrel Mob a social worker“.

And Simeon Brown has chipped in.

One rule for gangs under this Govt. Another for everyone else. https://t.co/gsMi5laDM0

The merits of the decision?  There is deep concern that Covid is spreading through gang whanau.  There are at least two public reports that I am aware of where gang members or associates have been infected and the nature of the disease is that it is almost inevitable that it has spread further.  Conventional means of reaching out will not work.  Like it or not the gangs are deeply suspicious of authority.  Why wouldn’t you ask their leadership to help with the response and the vaccine roll out?

Right now Sonny Fatupaito is an essential worker.  We need to do everything, conventional or otherwise, to reach out to all of our communities to make sure they are safe and to increase vaccination rates.

125 comments on “Right now Sonny Fatupaito is an essential worker ”