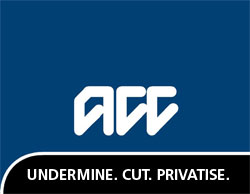 Last year, Nick Smith argued until he was red in the face that National was not moving to privatise ACC. You and I knew that was bollocks all along. After a year and a half of softening up the public, with Smith telling outright lies about the financial condition of ACC, the privatisation agenda is about to hit full swing.

Radio New Zealand has got its hands on an interim copy of the Government-appointed ACC stocktake group. When this group was appointed, the Government said it would not be looking at privatisation. Another lie, of course. The members of the group were handpicked by Smith – neoliberal David Caygill, rightwing economist Neil Quigley, private insurance executive Gordon Smith, and Smith’s man in ACC John Judge. They’ve come up with exactly the conclusions they were employed to make.

As many people have been saying all along, National’s hysteria around ACC last year was focused on creating an air of crisis. Now they’re going to ‘do something’ (and be applauded by the kind of idiots who buy spin and see doing anything as a solution). That something is privatisation of ACC.

It won’t work. It has never worked.

The last time National privatised ACC it was a huge failure. Private providers behaved exactly as we would expect a self-interested company to rationally behave – they introduced loss-leading policies to win customers and they sought to pay out as little as possible. When Labour re-nationalised the scheme, things were already starting to go to hell – the courts were being bogged down with ACC cases as insurers, employers, and employees wasted resources on trying to assign blame, the loss-leading phase was ending, and the largest insurer, Aussie-owned HIH, collapsed only months later.

Privatisation will not save money. The costs of injuries will still exist. The question of insurance is who pays them, Privatisation will force more of the cost on to workers. And it will increase costs because private insurers spend a large portion of their outlay on trying to avoid making pay outs. Not to mention those profits, which have to come from somewhere. Last time, small businesses found that privatisation actually cost them money because they were forced to spend time and money choosing a provider (let alone the risk that their provider would collapse or raise its levies).

The PriceWaterhouseCooper report says that privatising ACC will deliver $200 million in profits to the principally Australian-owned private insurers. Why should we take $200 million out of our pockets and give it to foreign insurers?

ACC is very efficient. It made $3 billion in payouts, invested a billion for the future, and managed a portfolio of $14.5 billion at a cost of just $495 million last year. You find a private insurer that pays out 90% of its revenue on claims. It has enough money. Sure, when Smith was in the height of its hysterics, the value of the scheme’s reserves was down below $12 billion, it was the depth of the financial crisis, but since then it has made billions on the rising markets and Smith’s ‘crisis’ has evaporated.

National’s agenda is purely ideological. This is not about what is good for New Zealand it is about a blind view that private is best, whatever the facts say. Labour’s position here is simple – oppose this loud and proud every step of the way, expose National’s deceptions, stand beside the workers, and promise to re-nationalise ACC as soon as they get into power.