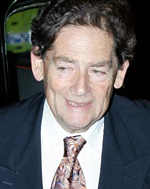 The Business Roundtable has invited Nigel Lawson, British Chancellor of the Exchequer under Thatcher, to speak to them on climate change. Inevitably, Lawson is a climate change denier. His message is that climate change is a replacement for communism and mainstream religion. He says people who are concerned about climate change are ‘eco-fundamentalists’ and ‘climate alarmists’ who want to destroy capitalism and should be ignored.

We shouldn’t still have to do this, but I’ll lay it down once more for Nigel’s sake: There is no scientific debate over whether climate change is real. The theory has been solid for 50 years, and every week studies come out showing that climate change is impacting the world now. Every prediction of climate change’s impact has turned out to be overly conservative. Effects, like the melting of the Arctic, that were projected to happen in a century, are happening now. Changes that scientists thought would take decades are taking years. The most respected scientific body in the world, the Intergovernmental Panel on Climate Change, which just won the Nobel prize, has acknowledged that its own dire forecasts are seriously underestimating the real world impacts of climate change. Climate change will wreak havoc on our economies and societies in the decades to come, and we must act now to even begin to mitigate its impact. This is serious stuff.

And what is the Business Roundtable’s reaction? To bury its head: invite out an old man, with no scientific pedigree, to tell them what they want to hear.

It’s just bizarre behaviour from an organisation that is becoming increasingly irrelevant by the day. If the Roundtable want to learn more about climate change then they’d be best to have a chat with the IPCC, but then I guess they’d rather listen to some silly old aristocrat than face the facts and take some personal responsibility for their actions.

Do you think Nigel Lawson’s the kind of person Nick Smith might have been talking about a couple of months back when he promised a National government would keep an open mind on climate change deniers?