Not everyone in the Beehive is thrilled that National is throwing away its chance at a third term for the sake of asset sales which make no sense, economically or politically. The Standard has obtained a copy of the generic column that National MPs are meant to add some ‘local flavour’ to and have published in their regional papers. It shows how cynical and shallow their position really is. 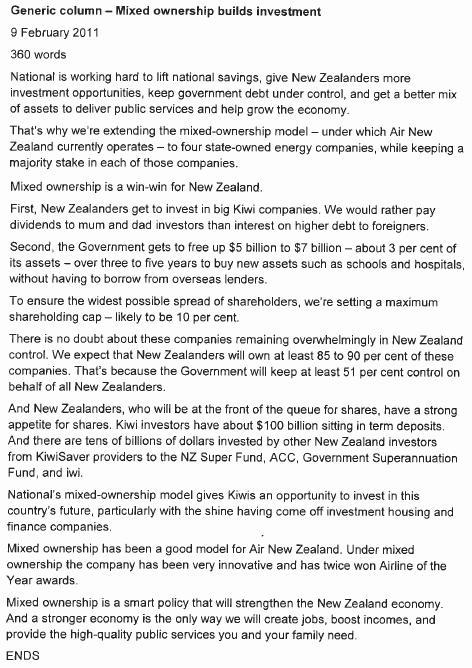 Should I bother rebutting the points? We’ve done this all before and they seem to have no new lines … OK, what the hell.

Actually, ‘national savings’ as measured by the country’s net international investment position is projected to worsen from $137b to $197b between 2011 and 2016. Selling the profit streams of highly profitable companies offshore will only worsen this trend.

Air New Zealand had to be majority purchased by the government to save it from collapse, which would have led to the loss of regional flights in New Zealand. That was the government buying into a failing privatised company, which is far different from the government selling shares in highly successful publicly-owned companies.

Mixed ownership is a win-win for New Zealand

It’s easy to create ‘win-wins’ if you only count one side of the equation. Real life is more complicated. You’ll note there is no mention of the lost returns, which far exceed the government’s cost of borrowing.

New Zealanders will get to invest in big Kiwi companies

We already own these companies via our government. And why can’t the vaunted private sector provide these big companies to invest in? Why are the big companies on the stock exchange either ex-state assets or companies that got big thanks to sweetheart arrangements with the government (like Fletchers, which built the first state houses).

We would rather pay dividends to mum and dad investors than interest on higher debt to foreigners.

First off, the Nats’ own estimate is that 10-15% of the companies, 20-30% of what is sold, will end up in foreign hands and there’s nothing to stop that number being higher. Most of the shares bought domestically will be grabbed by institutional investors. Second, mum and dad already own these companies and most can’t afford $4000 per household to pay again for what we already own – and if we all do buy our shares in our companies, isn’t that just a poll tax? Third, it makes sense to take on a little extra debt when the alternative is selling assets that have a higher rate of return than the cost of capital, especially when we’re talking $6 billion and the government had already borrowed $50 billion- it’s drop in the ocean stuff. Anyway,we end up with higher debt when we sell high returning assets offshore and have to borrow to fill the hole caused by the foregone dividends.

The government gets to free up $5-$7 billion

Actually the net revenue could be a lot less. Key himself reckons some of the valuations are too high. Take away bankers’ fees and incentives for ‘mum and dad’ to invest and you see why Treasury has booked only $3.86 billion. NSW sold part of its electricity assets recently (and is about to sell the rest) and there’s questions over whether it pocketed any net revenue.

… to buy new assets such as schools and hospitals

Actually, the revenue is booked to fund the normal new capital spending allocation, which National has cut in half and renamed the Future Investment Fund. It won’t buy new schools the billion over five years for education is just $250 per year per school kid.

There’s no doubt about these companies remaining overwhelmingly in New Zealand control.

Minority shareholders have rights, including the right to sure if the company doesn’t act in their interests, ie to maximise profits. Currently, SOEs have to consider the impact on the community of their actions, after privatisation they won’t.

New Zealanders … will be at the front of the queue

National still had no policy to achieve this and any such policy would be a costly subsidy for the few ‘mum and dad’s who can afford the shares from the rest of us.

… Have a strong appetite for shares. Kiwi investors have about $100 billion during in term deposits.

Um. That shows we don’t have a strong appetite for shares. In fact, the business community is always complaining that we don’t invest enough in shares to make them big profits playing the stockmarket.

Treasury says productivity gains will be marginal at best. And we acutely end up poorer because our profits flow offshore and we have to borrow to fill the gap.

Either National needs to magic up some stronger arguments, or it needs to listen to its staffers and drop this policy before it gets them slaughtered in 2014.