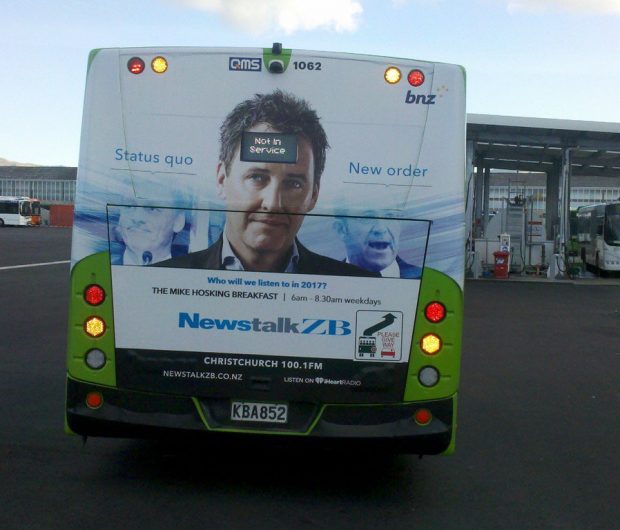 So Newstalk ZB is shocked, I tell you, shocked that Jacinda Ardern will no longer regularly appear on the Mike Hosking show.

For me I am shocked that she took so long to make this decision.

His show is the closest equivalent we have to Fox News, at least the more insane part of the spectrum of Fox News.

He is an unmitigated partisan hack.  He used to worship the ground that John Key used to walk on.  For years this site has poked fun at him for doing so.

His columns are basically social media for old reactionaries.  His pearls of wisdom show how superficial yet how confident rich white men can be.

Why Jacinda Arden spent regular time on his show I could never work out.  She spent less time on National Radio.  If she wants proper questioning on current issues then Hosking is the last person she should have been talking to.  Instead of this she was subject to the most partisan biased questioning you can imagine.

So the decision to no longer grant Newstalk ZB the privilege of a regular slot in her already overcrowded diary was completely rational and completely unsurprising.

And Hosking’s public shock at the way he has been treated causes me to experience unwarranted levels of smugness.

The rest of Newstalk ZB’s stable have predictably backed Hosking.

Like Barry Soper.  He is the reporter the description “avuncular” applies to.  Only if it means wedded to a view of the world that has well and truly passed and someone who thinks that uber confidence and having regular drinks with the protagonists and being a good old boy is what is required to be successful.

Because his latest effort, basically attacking Jacinda for attacking Newstalk ZB’s bottom line by deciding to no longer put up with Hosking’s crap, is a doozie.

Soper trots all of National’s attack lines in one article.  This is quite a feat.  Like:

She achieved the most remarkable election result under MMP ever and had levels of support not seen since Micky Savage but you think that.

Without Peters or Covid chances are she’d be leading the Opposition, although even that’s doubtful.

She caused Labour support in 2017 to surge 15% in a short few weeks and has since led the country into a remarkable position envied by all.  She led the country through a terrorist attack and a natural disaster and a global pandemic and clearly thrives on adversity.

Having worked with the past 10 Prime Ministers, Jacinda Ardern would be the most removed from the media than any of them.

Your media only.  She has a social media outreach envied by all other Kiwi politicians.

She’s commanded the Covid pulpit to such an extent that the virus has become her security blanket; without it, she’d be forced to face the reality that her Government has been moribund.

The Prime Minister’s press conferences usually begin with a sermon – it took eight minutes for her to get to the fact that she was moving the country down an alert level last Friday.

This was her allowing others space to talk about the earthquake and tsunami crisis that happened that day.  Not hogging the limelight is the sign of a leader.

Ardern doesn’t relate to the messenger, the team of journalists who make up the parliamentary Press Gallery – they don’t know her.

She has not had drinks with you?

All of her predecessors got to know the parliamentary media by inviting them to their ninth floor Beehive office, at least a couple of times a year.  It puts a human face on the public performer.

Compare Ardern to the last populist Prime Minister, John Key. The National leader liked to be liked and he was because he was self-deprecating, posing for selfies with students on University campuses, falling off stages and mincing along catwalks.

Believe me, and I have witnessed it, Jacinda has probably posed for more selfies than all other NZ Politicians combined.

The closest Ardern’s got to silliness was admitting she did a dance with her daughter when the country had no active cases of Covid last June.  That admission flashed around the world as do most things when it comes to Ardern.

We need more silly leaders to get us through a pandemic …

Please make your mind up.  Is she too populist or not populist enough.

Leaders have in the past become exasperated with the media, and at times with good reason, but few, if any, have shied away from the tough questions.  The regular Newstalk ZB slot for Prime Ministers has been jealously guarded by them for the past 35 years.  This is the only regular slot she’s bowing out on.

Newstalk ZB needs to realise that, in part thanks to the ultra partisan approach it has taken to the news its relevance is decreasing.

With an economy and a Covid response that is the envy of the world if this is treading water I would hate to see what swimming was.  I can hear Barry hoping and praying that the Government fails.

To Soper and Hosking and co, your sense of privilege is showing.  Stand in line with the rest of the reporters.  I am sure that if the subject is important enough Ardern will engage with you.