#Sheepgate – it was the official’s fault 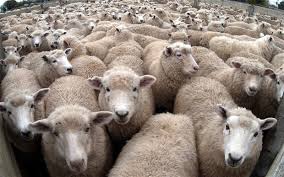 National would have us believe that our Government paid over $11.5 million to a Saudi sheep farmer in the hope and expectation that he would not sue us for $30 million based on a cause of action that has still not been identified.  The more likely scenario is that this was payola to get the Saudi Government to complete a free trade agreement with New Zealand.  The only problem is that there is no sign of one being completed.

National tried desperately to blame Labour.  Key and McCully both suggested that the fifth Labour Government created the legal problems and all National was doing was fixing things up.  Key even suggested that there were cabinet papers in existence which confirmed Labour’s guilt.  The effect of this was dented when National refused leave to Labour to table the papers in Parliament.  And despite promises that release of the cabinet papers would be expedited they still have not seen the light of day.

The counter propaganda is being rolled out.  Leaks have been made to that subversive left wing media outlet Newstalk ZB which essentially exonerate Labour but lay the groundwork for another defence.

This was posted yesterday:

A young official who spoke “out of turn” brought down a potential free trade agreement between New Zealand and Saudi Arabia, Newstalk ZB understands.

The Saudis had already expressed some displeasure at the National government continuing the export ban of live sheep to the Gulf state put in place by Labour in 2003.

The young official was travelling with then-Agriculture Minister David Carter during a meeting with his Saudi Arabian counterpart in Rome in 2009.

Carter told the minister that sheep exports wouldn’t be continued.

It was at that point in the meeting, Newstalk ZB understands, the official “lectured” the Saudi minister on how New Zealanders would find it unpalatable it would be to return to live sheep exports.

The Stanford-educated Saudi considered the official to be speaking out of turn and the trade deal was off.

Get that?  It was not Labour, nor National’s refusal to lift the ban on the export of sheep for slaughter, but some ill chosen words from a junior “official” that caused the problems.  I wonder what rank the official had and whose office he was associated with.

David Carter had had his say and the baby face, whipper snapper official, in his mid twenties, put in his bob’s worth telling the Saudi how unpalatable resuming the trade would be in New Zealand. It was the straw that broke the camel’s back, the Saudi felt he’d been lectured to by someone who certainly should have been seen and not heard.

Of course the Saudis were already out of sorts after one of their rich businessmen, with direct links to the King, had poured money into the trade that had been halted.

As the free trade deal with the region began slipping off the slaughter board, Muzza McCully came up with what he hoped would be a solution, a facilitation payment of four million bucks to the businessman, which some say was a bribe, and with a Kiwi taxpayer equipped and stocked farm in the desert as a model to showcase our agriculture that few, if any, are likely to be allowed to visit.

The Nats say this debacle is all Labour’s fault anyway, and Cabinet papers from the Clark Government are in the mail and will prove their point.

They blocked their release in Parliament last week by Labour which says it has nothing to hide but the posties appear to be on a go slow.

Are we really meant to believe that the country’s current problems with Saudi Arabia are because a young “official” spoke at a meeting 7 years ago and spoke about local views on the export of live sheep?

Besides negotiation of the Gulf Free Trade Agreement was concluded in 2009.  MFAT’s site says that “[o]fficials must now complete the legal verification process before the FTA can be put before Ministers for signature”.

Another interesting development is the announcement of the export of 50,000 sheep to Mexico for breeding purposes.  The sheep are to be transported on the livestock carrier Nada.  Animal activists are up in arms as there is “huge potential for the animals to seriously suffer in the stressful, terrifying weeks-long ocean journey”.  And the number being exported is staggering.

Saudi Arabia meanwhile must be looking on and wondering why live exports to Mexico are permitted but not to Saudi Arabia.

And those cabinet papers still have not appeared.

This Government may have blown $11.5 million and achieved exactly nothing.  The Auditor General really needs to have a look at this.

48 comments on “#Sheepgate – it was the official’s fault ”