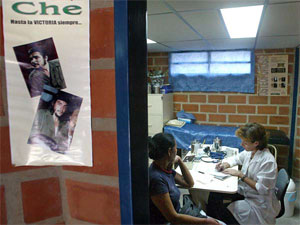 A reader just sent me a link to a piece in The Guardian entitled: “First world results on a third world budget”.

It’s an investigation of Michael Moore’s claim in his recent documentary, Sicko, that Cuba’s health system puts America’s to shame on just an annual per capita health expenditure of US$260 – less than a 10th of Britain’s US$3,065 and a fraction of America’s US$6,543.

While the article goes to lengths to avoid claiming the Cuban system’s perfect, what seems to be making all the difference is their focus on prevention, led by free access to primary health care.

From promoting exercise, hygiene and regular check-ups, the system is geared towards averting illnesses and treating them before they become advanced and costly… Simple, free access to GPs is a bedrock of healthcare.

Cuban healthcare is no utopia. At times it is ragged and harsh. But the virtues are no myth. People live as long as they do because the system, overall, works.

The article notes that back in the UK there’s an overdue but increasing focus on the importance of primary healthcare. Thankfully it’s a similar story here in New Zealand thanks to some decent investment in the health system over the last eight years – specifically, well over 2 billion into primary healthcare. As a result, on July 1 this year doctor’s fees roughly halved and prescription fees were lowered to $3. The intent was to make access to healthcare cheaper and easier.

It worked for me. I went and had my first general checkup ever as a result of the lowered cost. And it didn’t hurt a bit.