This article appeared in the 21 February issue of Victoria University’s student magazine Salient – and University Chancellor, Neville Jordan, couldn’t handle the jandal so lost the plot and spat the dummy. Big time. 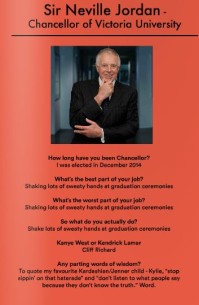 The spoof Q&A has Jordan saying that both the best and worst part of his job is “Shaking lots of sweaty hands at graduation ceremonies” and that what he actually does is “Shake lots of sweaty hands at graduation ceremonies”. When asked “Kanye West or Kendrick Lamar?”, Jordan opts for “Cliff Richard”. The article concludes with his parting words of wisdom “don’t listen to what other people say because they don’t know the truth”. 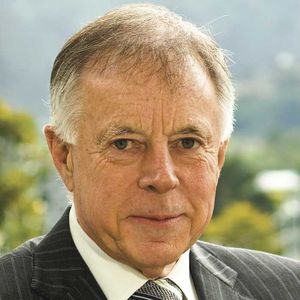 Yet, despite the brief piece appearing on the magazine’s regular “Funny News” section and despite the content being an obvious piss-take, Jordan let loose his RAEG during the “Urgent Business” part of the next meeting of the University Council.  Attendees were treated to a five-minute, red-faced, spittle-flecked tirade from Jordan.  He claimed that it was not made clear the article was satirical and its publication was a “disgusting . . . travesty“.  He demanded an apology. And, no, a written apology was not acceptable. The apology he wanted – nay, REQUIRED – had to appear on-line and be printed in Salient in the same spot where the fun-piece had appeared. Not only that, the apology had to include the word “unreservedly”. His demand was non-negotiable. Further, those responsible for this “disgusting travesty” were additionally REQUIRED to eliminate any and all on-line evidence of the article having ever existed.  Consequences for failing to comply were not specified, but the pressure was on.

Well, Neville Jordan got his unreserved apology but, poor diddums, making the item disappear from the interwebz forever is beyond the control of anyone now. For those concerned about this sort of bully-boy bullshit, feel free to wall-paper your social media with the article. Allow him to experience the streisand effect so other National Ltd™ neoliberal plants within our public education sector might be curtailed from similar acts of intimidation.